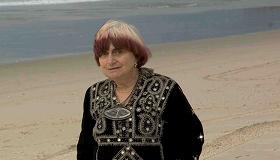 The Beaches of Agnès is described by its writer/director Agnès Varda as a self-portrait. Called "Grand Dame of the French New Wave," Varda has been a filmmaker for over fifty years. She said she had the idea for Beaches when she realized how many beaches had influenced her life. “These beaches are the thread through which I chose to describe, to friends, family and others, some of my work and the events of my life." The film captures Varda's continual enthusiasm for life and the cinema. This distinctive autobiography will attract cineastes, which should build word of mouth. Interest can be increased when Varda's Beaches are shown in conjunction with her classics like Cleo from 5 to 7 and Vagabond which are discussed in this latest documentary.

She has spent much of her life near the sea and her Beaches follows her personal trajectory. The film moves at a brisk pace with imaginative juxtapositions of scenes of Varda and her family today, historical recreations and film excerpts. Throughout, she gives insightful and often humorous comments of her travels and the people she has encountered.

The first sequence is on a beach in Belgium, the country where Varda spent her childhood. In striking scenes, large mirrors are set up on the sand, reflecting each other and Varda, emphasizing her belief that this documentary offers a mirror into her experiences.

Varda said that one purpose of the film was to make her daydreams real. She poses with circus performers on a beach and, in a delightful scene, floats in a sailboat down the Seine past the Eiffel Tower.

To keep up the theme of her title, six truckloads of sand were unloaded in Paris to create an urban beach. Her production company is amusingly created on sand.

Clips include a young Gerard Depardieu as a beatnik and many of the artists with whom Varda has collaborated like Catherine Deneuve, Robert De Niro and Philippe Noiret.

She speaks with deepest feeling of her late husband Jacques Demy ( Umbrellas of Cherbourg ) whom she met in 1958 and lived with beginning in 1959, saying that "this grand love venture, such a significant part of my life, weaved itself into my life as a filmmaker." She joined Demy when he worked in Hollywood. Images from that period range from Harrison Ford to Vietnam War protests. For her Beaches, she revisits Venice and Santa Monica.

Varda discusses the pain of Demy's death from AIDS in 1990. Her last non-documentary feature was Jacquot de Nantes in 1990, a tribute to Demy. As a feminist, her films, like Vagabond (1985), became less gentle and less joyful.

At 80, Varda remains a fascinating presence with a unique style. The top center of her hair is white, surrounded by an outer ring of brown, resembling snow on a mountaintop. Varda is still reinventing herself through her work. She has recently begun creating installation art. Describing herself as a "good gleaner (similar to the title of her recent documentary The Gleaners and I ) and a recycler," she has found an ingenious use for of an unsuccessful 1966 effort. A metal frame for a shack was built and the walls are made of the film. She calls it "A movie-lovers hut!"