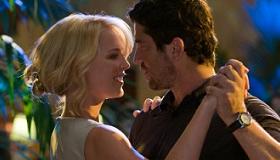 The Ugly Truth will test the limits of those who consider themselves immune to the mind-numbing, clock-punching effects of foregone conclusions. The latest romantic comedy from Robert Luketic (the winning Legally Blonde ) isn’t quite comfort food. Comfort food is warm and familiar and pleasantly transportive. The Ugly Truth is more like eating the picture on the front of the cardboard box of comfort food. The only thing setting the film apart from other tales of wish fulfillment for single women is the surprisingly vulgar language spouted by Mike Chadway (Gerard Butler), a relationship expert hired to pump up the ratings of a struggling Sacramento morning news show produced by control freak Abby Richter (Katherine Heigl). Otherwise, this is a studio romcom down to its bones, made even more disposable when viewed alongside the pretty darn wonderful 500 Days of Summer. It’s hard to imagine America having much long-term interest in this material, meaning mid-range box office for Heigl’s latest assault in her war to conquer the movies.

If it weren’t for Knocked Up, Heigl (TV’s Grey’s Anatomy ) would be batting a thousand in her quest to forge a supremely uninteresting film career. Here she plays a character we’ve seen too many times in these kinds of movies: the cool and severe professional woman (hair in a bun, of course) who has all the answers in the workplace, but no time to search for a man and no clue how to get one. She finds her dates on the internet, does background checks beforehand and gives them talking points for dinner table conversation. In other words, Abby can only exist in the movies. One night, alone again with her TV and her cat, Abby watches a public access program hosted by Mike, a foul-mouthed and chauvinistic relationship expert. She’s horrified by his theory that true love is a myth and that men are single-minded sex maniacs. She’s even more horrified when he’s hired to spew his venom in a segment on her morning program—which becomes an instant hit later due to his involvement.

One way to get men to see a romantic comedy is by making the male lead a handsomer, more commercially viable iteration of radio crotch jock Tom Leykis. But the movie really hasn’t considered all the implications of that. Here’s a romantic comedy where the female lead ends up in the arms of a sexual manipulator. You go, girl! But to make such an eventuality go down easier, Mike is given a lame, sentimental reason for his boorish outlook, making him the poor wounded bird that any woman would love to nurse back to health and be rewarded with a lifetime of blast-off sex. So now the movie is telling ladies to find a jerk, preferably one whose rugged beard never gets longer or shorter, and change him.

But to complain is to digress. Before the lame ending, featuring some surprising below average effects shots, Mike uses his PhD-level knowledge of getting laid to mentor Abby so she can bed Colin (Eric Winter), a dreamy doctor who fills all the boxes in her boyfriend checklist. Mike teaches her some of his manipulative tricks (bring a pen and paper, ladies) and sexes up her wardrobe. He even makes Abby wear a transmitter in her ear so he can remotely whisper man-attracting bon mots, a brief detour into Cyrano/Pygmalion/ Roxanne territory will play great with those who know nothing of Cyrano, Pygmalion or Roxanne. What this unfortunately boils down to is that Mike has become attracted to Abby because she’s dressing hotter. And he really turns the corner after she wears vibrating panties that activate during an important business dinner, sending her into hilarious fits of ecstasy. Well, it would have been hilarious with any sort of comedic build. But the scene is as blunt and unrefined as Mike. And now that Mike has seen Abby in body-hugging dresses and heard her orgasm, he’s ready to fall in love. What a nice movie this is.

The Ugly Truth is made by filmmakers who’ve been here before and believe their B-game will be enough to charm audiences. But it’s incessantly average and to scratch its surface is to reveal a message that is surely unintended, but nevertheless rather venal. The only person trying too hard is Heigl, whose little happy dance is cute, but smacks of desperately wanting to be America’s new big screen sweetheart. Butler looks like a much heftier actor trying to squeeze himself down and lighten himself up for the role of a charming rogue, a handsome flamethrower of bitter wisdom. At one point, he does say that men are incapable of “growth, change or progress.” The same can be said for studio made romantic comedies, especially ones where the language is adult, but the philosophy is juvenile.