close
Living well for as long as you can

The Way We Get By 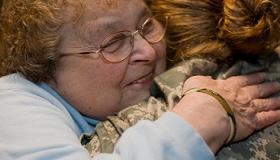 Three senior citizens who’ve made greeting troops destined for or returning from Iraq and Afghanistan their life’s purpose are profiled in a sterling documentary that doubles as an essay about mortality. The Way We Get By contains more useful, homespun philosophizing and genuine sentiment than a year’s worth of narrative films. That it’s so well made is a bonus. Having logged countless miles and garnered many accolades on the festival circuit, the movie will do token theatrical business in NY and LA on its way to television—most likely PBS since POV is co-distributing.

Since 2003, residents of Bangor, Maine and surrounding communities have been volunteering as greeters at the Bangor International Airport, a primary stop for American troop transports. Hundreds of thousands of U.S. military personnel have passed through and will continue doing so for the foreseeable future. Maine Troop Greeters are there whether the men and women are coming or going. Offering handshakes, encouragement, snacks and pre-paid cell phones, the volunteers perform their duties at all hours. We get to know three quite well.

Bill Knight, age 87, is a World War II vet and widower who lives alone on a farm. He’s in debt, has prostate cancer and misses his wife terribly, but none of that prevents him from being there to express his thanks and appreciation. Early in the film he simply states, “Our troops need our support.” As his health worsens and he’s forced to sell his property, Bill continues to offer up fateful, New England insights (“The world just keeps turning”) and ultimately explains his generosity by saying, “I have nothing to live for other than what I do for other people.”

Widow Joan Gaudet, age 75, lives by herself and despite her infirmities and fear of slipping on her ice-covered driveway, Joan relishes rising in the early morning and driving to the airport. She does find it difficult to say goodbye to troops beginning a tour and so busies herself in the organization’s kiosk when flights are departing for battlefields abroad. During the course of the film, Joan, the mother of eight (including the film’s director Aron Gaudent) must say goodbye to two of her grandchildren as they ship out to Iraq.

Jerry Mundy, age 74, is the most gregarious of the bunch, a roly-poly former ironworker with an infectious laugh and banter for any situation. His closest companion is his dog Flanagan. Jerry suffers a medical setback of his own (heart-related) and is equally philosophical about his trials—including the death of his son at the age of 10—and frank about why he volunteers his time.

What all three remarkable and remarkably ordinary senior citizens have in common is loneliness and a natural yet not knee-jerk love of country. They believe the troops need and deserve their support, no matter the rationale behind the conflict. They also cop to needing their greeting duties just as much as the clearly grateful soldiers need a morale boost. In all three cases, “greeter withdrawal” is a major concern. When they’re not at the airport, they miss it.

No flag-waiving exercise, The Way We Get By is apolitical (like its three subjects), without shying away from patriotic uplift or the shadows surrounding both warfare and the aging process. The theme of death is addressed mainly by focusing on the plight of the elderly middle-class. Links between their sense of isolation and health woes to the possibility of death or injury faced by the troops don’t have to be underscored.

Directing his first feature-length piece, Gaudet, assisted by producer and interviewer Gita Pullapilly, remains objective and sensitive. He and co-cinematographer Dan Ferrigan are responsible for some beautiful footage. It’s refreshing not to have to watch grainy video or twitchy photography. This intimate film never strikes you as homemade or anything but professional. Some especially lovely shots of the Bangor area in wintertime are deployed, not to contrast with the terrain and climate of Iraq or Afghanistan so much as to mirror three people in the last, surprisingly fulfilling season of their lives. For good reason, there’s no third act to The Way We Get By. Chances are the next stage for Bill, Joan and Jerry will be debilitation and death, just as for a small percentage of the troops.