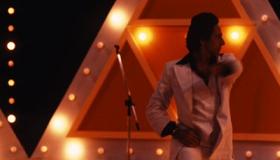 Set in 1978, just five years into dictator Auguste Pinochet’s 17 year regime, Chilean director Pablo Larrain’s modestly celebrated period drama is a curious look at the long, unpredictable and often indiscernible shadow of American influence on Latin America, politically and culturally. Despite the title—a reference to the character played by John Travolta in 1977’s Saturday Night Fever (and its 1983 sequel, Staying Alive )—the picture is anything but a love letter to either the movie or the character. Larrain’s consciously raw execution in telling the story of a compelling but ultimately unsavory character is an id-bending exercise in provocation that’s both competent and challenging enough to possibly ride a lengthy platform release to middling arthouse success, assuming it can continue to hold screens into the early Fall.

As if to underscore the process of perversion that American culture and politics undergo when moving southward, Larrain centers his film on the most un-cinematic lead character imaginable. Raúl Peralta (co-writer Alfredo Castro) is a grizzled, 52 year old thug who has developed a wholly unnatural obsession with Travolta and Saturday Night Fever, an addiction enabled by the film’s seeming refusal to leave Chiléan theaters even a year after its original release. He knows the dialogue and the moves, yet somehow misses the point of the film itself. Ironically, Raúl’s entire dichotomous existence is a product of American exports—as he supports himself with petty crime, capitalizing on a degrading societal and political atmosphere facilitated by the CIA-orchestrated coup that installed Pinochet as dictator (an unmistakable subtext that is never addressed directly), he still harbors dreams of fame and success to be garnered from a roof-raising Travolta impersonation on a television contest show, an act he has faithfully honed for months in a local dive. Both facets of his life, however, are perversions of American ideals—the deadliness of anarchy in place of freedom, the tediousness of kitsch in place of entertainment. That this scrappy, unappealing figure of dubious character should end up earning the affections of several fellow performers only adds to the pervasive sense of perversion.

To Larrain’s credit, the film never deviates from its thematic concerns, even as it veers toward a finale that flirts with redemption. The temptation to cave entirely to Hollywood standards would, in a sense, have represented the ultimate perversion but also the ultimate betrayal, as it would have suggested hope for this self-made light at the end of a manufactured tunnel. Whether or not such is or ever could be possible is not for Larrain or his film to say—fueled by Castro’s dour, understated performance and magnificently lined face, it’s enough to merely call attention to the issues at hand. Any further conclusions and extrapolations are up to the audience. Those seeking a lighter, more overtly satisfying homage would do well to seek out Singaporean director Glen Goei’s 1998 That’s the Way I Like It (a.k.a. Forever Fever ), a frothy romantic comedy that could just as easily be paired with Tony Manero on a double-bill addressing the fascinating and divergent ways in which Americanism is exported and absorbed in Asia versus Latin America.

But there is a more existential dimension to Tony Manero as well, one that speaks to the internal human struggle between light and dark, a struggle few individuals and even fewer films strive, much less succeed, at addressing. Larrain and his colleagues don’t necessarily pull it off, but their effort is praiseworthy and, in fits and starts, successful enough to warrant deeper consideration.