close
As predictable as rain in Seattle 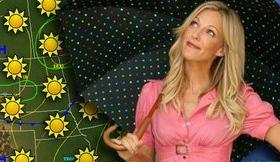 There’s a reason local TV weather people in meteorologically predictable cities are either A.) wacky or B.) gorgeous. The residents of, let’s say, Phoenix are fairly confident it’ll be hot this summer, so someone wacky or gorgeous is required to entertainingly convey something they already know. And that brings us to Weather Girl, a romantic comedy that tells us things we already know. Unfortunately, the film can’t find an unpredictable or surprising way to do it. The best thing about Weather Girl, which is written and directed by Blayne Weaver, is the spirited and engaging lead performance by Tricia O’Kelley as a Seattle weather anchor with a stormy career and personal life. But the broad performances, standard plotting and mild smiles recall a pleasantly predictable cable movie. And appropriately enough, the film has been picked up for an October 2009 airing on Lifetime, where its bubbly blandness will play most effectively.

Every weekday sassy weather girl Sylvia Miller (O’Kelley) appears on the local Seattle morning news and announces to residents that it’s going to rain. But on this day’s report, Sylvia goes on a foul-mouthed, career-destroying rampage directed at boyfriend Dale Waters (Mark Harmon, wisely underplaying the part), a “walking haircut” who happens to be the show’s anchor and who also happens to be cheating on Sylvia with his co-anchor. Instantly fired, Sylvia begins a downward spiral that finds her sleeping on the couch of slacker brother Walt (Ryan Devlin). An unsympathetic and sarcastic man-child, Walt engages in behavior that never rings true (Weaver’s lame shortcut to making Walt totally slacker-awesome is having him wear John Belushi’s “college” t-shirt from Animal House. But “college” is misspelled, presumably to avoid rights payments). His first brotherly act is to post Sylvia’s televised meltdown on the internet and Sylvia, although this is 2009, is surprised that her antics would be seen by others. Branded an unemployable joke she’s reduced to working as a waitress, which is about as realistic as it sounds.

One thing about romantic comedies is that they’re sincere. If they’re cheesy, they fully invest and believe in the power of love, even when expressed through cheesiness. Weather Girl cannot be sincere while at the same time pitching itself to the cheap seats. The story feels mechanical, phony and arch. The only hint of reality is Sylvia’s concern about her age. She’s none too happy being an unemployed 35 year old living with her brother. Her Greek chorus of girlfriends try to improve her dating life by setting her up with an accountant named Charles (Jon Cryer), but he's is a near-pathological straight arrow whose life is planned out so thoroughly that his kids have been pre-named Lucius and Ariel. There is, however, one more option. In classic sitcom fashion, Walt has a friendly neighbor who barges through the front door whenever necessary. He’s Byron and he’s about six years Sylvia’s junior (another lame shortcut to Funny Street: give youthful characters quirky names like Byron, Walt and, later, Irving). Another wacky slacker, Byron (Patrick J. Adams) is a website designer and self-described “great rebound guy,” a talent that Sylvia eventually and reluctantly avails herself of.

Weather Girl ’s low budget may excuse the occasionally underlit photography and bland score, but it can’t excuse its predictability and lack of authenticity. Walt and Byron are silly and CW-thin so they can’t be taken seriously, giving Sylvia no one substantial to bounce her frustrations off (Paul Rudd would have made Walt into something way more interesting). This is especially vexing when we’re supposed to consider Byron a contender for the happy-ending boyfriend. His competition, though, is Dale. When Dale and the station re-hire Sylvia to co-host a George and Alana-style morning bicker-fest, we’re supposed to hope she doesn’t make the same mistake twice. But since neither men are gems, Sylvia should really go where the money is. It may not be romantic but with Washington State’s unemployment at 9.2%, it would be the most truthful thing the movie had to offer.