close
A different breed of animation 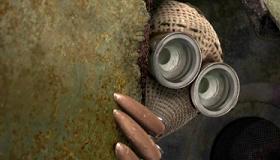 Shane Acker’s animated short won the Student Academy Award and earned an Oscar nomination in 2004, and here, he’s successfully turned the premise for that short into a full length ‘toon that falls somewhere between The Terminator and WALL-E (with the emphasis on the latter). About a small band of “creations” who try to save what’s left of civilization in a post-apocalyptic world, 9 is short in length (a scant 79 minutes including credits) but long on invention. 9 may not do anywhere near the business Coraline did for Focus Features but it should carve out some money in theaters before really cashing in on DVD.

Like the sadly underappreciated Battle For Terra, this Sci-fi, futuristic fantasy is one of the rare ‘toons these days not out for laughs. It’s easy to see why such esteemed producers and visual stylists as Tim Burton and Timur Bekmambetov ( Wanted ) would throw their considerable weight behind Acker’s ambition to turn his short into a feature length story—although not a whole lot of complexity has been added. Acker, with a script by Pamela Pettler ( Monster House ) is able to flesh out and add numerous characters in addition to its “star,” #9 (voiced by Elijah Wood), a visionary, stitched-together creation that quickly displays strong leadership qualities just when they are most needed.

In this penultimate version of the tale, nearly everyone can speak (unlike the previous version) and a starry cast is given ample opportunity to bring the characters to life.

These characters must come together to fight the evil machines that have taken over the planet, particularly a very menacing, marauding, mechanical beast that threatens everyone. As most of the human population has been completely destroyed, this small band of unique beings was given a glimmer of hope and life by a scientist in the final days before the end. They continue to thrive against long odds versus the all-powerful controller known as The Great Machine.

Among the main players we get to know are #1 (Christopher Plummer), a war vet and longtime leader; #2 (Martin Landau), an older inventor; #’s 3 and 4, twins who communicate silently with each other; #5 (John C. Reilly), the engineer; #6 (Crispin Glover), an overly creative soul lost in his own world; #7 (Jennifer Connelly), a strong self-starter and ace warrior; #8 (Fred Tatasciore), a dim bulb assistant to #1. Each of these flawed but appealing stitchpunk creations come together under the inspired vision of #9 and set out to create a new beginning in the shadow of so much death and destruction.

Acker’s visuals in detailing the mission of this makeshift community are stunning, a visual splendor the director says was inspired by the bombed-out European cities in World War II and the fantasy artwork of Zdzislaw Beksinski. He succeeds in a way that ought to keep moviegoers of all ages (maybe not under 8) glued to the screen.

9 (sure to be confused in title only with Rob Marshall’s upcoming musical, Nine ), is a brilliantly animated and welcome treat for moviegoers searching for adventure, inspiration and complete originality.