close
A highly scheduled trip with one or two snags 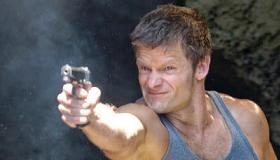 David Twohy’s programmatic vacation thriller A Perfect Getaway is silly and fun and while it has its annoyingly meta moments it certainly won’t leave you bored. Twohy, the man who brought us Pitch Black, finds every possible opportunity for mistaken identity and genre reliant bait-and-switch—and then proceeds to squeeze them all dry. Newlyweds Cliff (Steve Zahn) and Cydney (Milla Jovovich) are on honeymoon in Kauai, planning to take a scenic and slightly treacherous hike to a hidden beach. En route they hear a couple was “butchered” on Oahu, and while that’s a different island, all tourists in the Hawaiian Islands are on high alert. Primarily a high-grade b-thriller, Getaway feels hollow in its lack of subtext and often uninteresting with its goofy and occasionally convoluted reveals. Still, it’s sturdy genre fair and not too problematic so attendance should be decent.

The film begins with an excessive amount of home movie footage from a wedding—Cliff and Cydney’s wedding. Then we see the two make their way to Kauai by helicopter; affording us some pretty staggering views of the landscape their copter pilot calls “the most beautiful dead end on earth.” Once at the mouth of the trail, they meet ex-military man Nicko (Timothy Olyphant) and his strong, southern girlfriend Gina (Kiele Sanchez). Both couples are aware of the couple killers on the loose and so agree to hike together (implying safety in numbers), but of course they could be amplifying potential danger by traveling with strangers. Since we follow Cliff and Cydney as protagonists we hear their dialogues about how odd the ex-special ops member Nicko is and how eerily good at gutting game Gina seems to be. While we don’t hear a word Gina and Nicko say about Cliff and Cydney, Nicko makes his apprehensions clear by asking Cliff, apparently a somewhat successful Hollywood screenwriter, about what a good story a newlywed murdering couple would make for one of his scripts. (Ironically, this Getaway is evidence it’s really not that great a premise.) As Nicko’s taken a beginning screenwriting class, he’s repeatedly asking jargon filled questions of Cliff, and making glib little insider comments (“It’d make a good second act twist.”). The problem is, the meta bits hit you over the head with the same blunt force as the constantly repeated helicopter footage or the needless genre “boo” moments. After Cydney tells Gina a sad and scary secret, a branch falls on their tent. It leaves you lots to think aboutleaves. Get it? Yeah. It’s all about as clever as that joke.

Early in the hike, the couple finds a trio of ditzy twentysomethings wrestling with their cell phone signals, and while it establishes the lack of service in the hiking area, it also makes more evident the age of the protagonists. They’re all well into their thirties, which is as much a cue to their intelligence (and therefore culpability) as it is a strange cue to the film’s projected demographic. Meanwhile the killer’s reveal is a little obtuse, which mismatches the culpable, supposedly intelligent demo of the film. Or so it seems. Twohy goes a little DePalma at the film’s climax, depicting a chase in multiple split screens that repeats in form the identity crisis on which the story hangs—but that’s not the film’s only identity crisis. At points the film’s self-aware references evoke other films. (I could have sworn there was a reference to Peter Weir’s Fearless in a story told by Nicko about a plane crashing into a cornfield.) Perhaps, rather than making a genre thriller, Twohy was trying to make a film about genre thrillers. Yet, if this was really his intention, it hardly seems one he committed to thoroughly. In the end, the film begins feeling more like a game of Clue than a thriller. But even with the bits that make you roll your eyes, you’ll still find it hard to locate a dull moment.