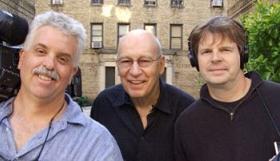 “Think Different.” “Just do it!” “Got Milk?” “Where’s the beef?” Are these cultural zeitgeist catchphrases we’ve heard ad infinitum pandering mercantilism? Soul in a slogan? And/or Both? Where did they come from? Whose wily mind produced them? And what makes these creatives do what they do? The documentary Art & Copy quite successfully and entertainingly answers those questions as it interviews and observes the most imaginative pioneers of an industry that has literally defined our mainstream culture during the past 50 years. Art & Copy possesses enough classy artistry, hip invention, and big-idea philosophy to launch itself into the documentary stratosphere--where it belongs.

Art & Copy steers us into a world far from the early-sixties, NYC-centered, nostalgia-laden smoke-filled offices of the popular Mad Men television series. For one thing, among the several Advertising Hall of Fame visionaries the film focuses on, a surprising number of them are based on the West Coast, especially in San Francisco. There, we meet Hal Riney, whose folksy style and world-renowned soothing voice (which became the narration for many of his commercials) created some of the most emotional campaigns of the 1970s and ’80s. Think: Saturn, Perrier and the groundbreaking commercial, which helped re-elect Ronald Reagan in 1984. Like a Norman Rockwell painting, his “Morning in America” axiom invented nostalgia for a time and place that, rarely if ever, existed, admits Riney (who grew up during the depression).

Also in SF, Rich Silverstein and Jeff Goodby, who revitalized the milk industry and made advertising history with two simple words, are outspoken believers that advertising is best when it’s entertaining and intelligent. Interviewed in their stunning Portland, Oregon offices, Dan Wieden and David Kennedy helped turn a little-known athletic shoe company into a cultural phenomenon with, “Just do it.” In New York, writer Phyllis Robinson worked at the center of the ’60s advertising revolution. Her “It Lets Me Be Me” campaign for Clairol hair products easily evolved into the “Me Generation.”

Filled with worthwhile (if often disheartening) statistics, Art & Copy informs us that during the 1970s, the average city dweller received--between TV commercials and billboards--a barrage of 1,000 advertising messages in a week. Today it’s more like 5,000. Seven billion dollars is annually spent on billboards alone. The average household watches 8 ½ hours of TV daily; 75% of American homes contain 3 or more television sets.

Director Doug Pray, who himself has directed ads and short films for PBS, Ford, Kodak, Adidas, Nike, Sprite and numerous others, seems a perfect match for his subject. His previous sociological documentaries include: Surfwise, about a surfing family; Big Rig, which follows long-haul truck drivers; Infamy, a portrait of graffiti artists; Scratch, about hip-hop DJs; and Hype!, which explores the ’90s Seattle music scene. On reflection, Pray sees more similarities than differences between the surfers, drivers, DJs, rock musicians and successful ad men. They’re all “fiercely independent mavericks,” he observes, with a personal message and “the innate human urge to express” themselves. The film owes its masterly editing to the off-beat vision of Philip Owens, whose idiosyncratic approach attracted directors such as Alejandro González Iñárritu ( Amores Perros, 21 Grams, Babel ) and Tony Kaye ( American History X ).

In the doc’s opening images, filmed in French Guiana, Pray cleverly connects Modern Man’s allure for self-expression with the ancient petroglyphic stories prehistoric artists and shamans painted onto cave walls and carved into stone outcroppings throughout the world: The same creative impulse in different media and formats. Toward the film’s end, an advertising executive admits: “the terrifying thing about being a creative person is that you have no idea where your ideas come from, or”--even more importantly--“where they’ll come from tomorrow.” Still, George Lois believes that “Creativity can solve anything.” And the man, noted for successfully launching a new Tommy Hilfiger campaign overnight, ought to know.