close
For a wide release, this one’s got a “can’t believe I found this one in the $3 bin!” vibe 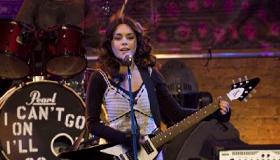 Despite co-starring High School Musical 's Vanessa Hudgens, this teen comedy positions itself as the anti-Disney rock flick; its more influenced by Belle and Sebastian than Britney Spears. Josh A. Cagan and Todd Graff's (the latter of whom also directs) is a modest if over long crowd pleaser about a gang of kids who form a band—and not just any band, but a honed, savvy and hip product ready for Myspace success. Though production company Summit made a blockbuster out of the similarly underestimated Twilight, Bandslam will be greeted at the box office with the lazy affection given a good, but unknown opening band.

Will (Gaelan Connell) isn't a high school musical dreamboat. He's a geek who worships the Arcade Fire and Lou Reed—both name checked way more than you'd expect for a movie co-starring Disney cash cow Vanessa Hudgens, here, cast against expectation as a proto-Janeane Garofalo depressive who goes by the name of Sa5m. (The "5" is silent.) Will's classmates hounded him out of Cincinnati, so single mom Karen (Lisa Kudrow) found an excuse to settle in New Jersey where the big buzz is Bandslam—a competition that pits high school bands from NJ to NY against each other for a recording contract. "It's Texas high school football big," explains Sa5m, when Will notes that the fan base for their school's number one band, Ben Wheatly and the Glory Dogs, models their frenzy after Nuremberg.

After the most popular girl in school, Charlotte (Alyson Michalka), graces him with her friendship, Will resolves to manage her band to stardom—or at least to beat her ex-boyfriend Ben (Scott Porter) and his ego project. Though Will is immediately smitten with Charlotte, much to Sa5m's annoyance and our confusion that he could win either of the beauties, this is a teen musical that thinks music is at least as important as who's crushing on whom. Will's more fixated on rounding out the band's sound—he's hilariously named them I Can't Go On, I'll Go On—than he is on scoring his first kiss with Charlotte or Sa5m, though naturally that and several plot contrivances are as inevitable as the next U2 album. Fill in the rest of their wacky band mates and an unnerving subplot where Will pimps out his mom to snare the best dummer in school, and you have a charming eye-roller with a nice streak that goes as deep as casting real teen bands for I Can't Go On's completion. It's easy to be cynical about a film that has David Bowie discovering the group on Youtube, but the joy on Will's face as he crowd-surfs for the first time shot me right back to 15 years old, at the front row of the Butthole Surfers. If you gotta take your kid brother somewhere this weekend, at least he might leave this motivated to pick up a bass, or at least a Ziggy Stardust cd.