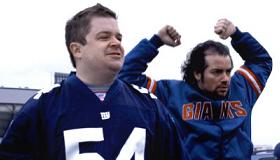 As in screenwriter-turned-director Robert D. Siegel’s screenplay for Darren Aronofsky’s The Wrestler, Big Fan analyzes the ways professional sports are a kind of surrogacy for male identity and the deep, and in some ways masochistic, desires for respect and wish-fulfillment the arena and stadium satisfy. Like Mickey Rourke’s acclaimed wrestler Randy the Ram, Patton Oswalt’s Paul Aufiero is by every outward measure a loser—a lonely man approaching middle-age who still lives at home with his shrewish mom and holds down a dead-end job because of the freedom it gives him to follow his real calling: as the New York Giants’ number one fan. To Siegel, who sees American consumer culture as a wasteland of idiocy, spray tans, 50 cent album covers and very bad boob jobs, these sport-obsessive men are like misunderstood artists, sacrificing the comforts of middle-class normalcy in exchange for a perilous purchase on beauty (as they understand it) and a place to stand they can call their own. It’s a strangely old-fashioned vision of American life—a male-centric one that harkens back to golden age writers like Mark Hellinger ( The Roaring Twenties ), W. R. Burnett ( The Asphalt Jungle ) and even Damon Runyan ( Guys and Dolls )—but Siegel finds rich characterization, meaningful emotion and the highest of human stakes in vast and neglected worlds most films don’t even bother to notice, much less to dramatize.

Paul Aufiero (Patton Oswalt, looking like a cross between Lou Costello and a jowl with eyes) is a parking attendant who spends his shifts composing screeds about the greatness of his idols, the New York Giants, and especially their Quarterback Quantrell Bishop (Jonathan Hamm), the man leading the team toward a seemingly inevitable championship. By day, Paul is one of those men nobody notices, but at night, he’s “Paul from Staten Island,” a call-in fixture on a sports talk radio station called The Zone, where Paul speaks for all the less articulate Giants lovers, especially when he engages in a war of words with his on-air rival, Eagles-freak Philadelphia Phil (Michael Rapaport). It all goes wrong for Paul when he and his best pal Sal (another flawless performance from the under-appreciated Kevin Corrigan) spot Quantrell at a gas station and trail him to Manhattan, where Paul is mistaken for a stalker and beaten into a coma by Quantrell. When Paul wakes up after three days of unconsciousness, he’s suffering from headaches, Quantrell has been suspended and Paul’s shyster lawyer brother wants to sue Quantrell for $77 million dollars. In other words, the fate of Paul’s favorite team rests squarely in Paul’s hands.

That sounds like the set-up for a comedy of the The Fortune Cookie variety, but though Big Fan is not without laughs, Siegel (and Oswalt, who gives a tour de force performance) take Paul’s conflict seriously, in the same way De Sica found high tragedy in post-war Italy’s lost bicycles and itinerant shoeshine boys. Oswalt’s brave performance will likely determine the success or failure of Big Fan —like The Wrestler, this film will need to be critic-driven, and, if anything, it’s a more difficult movie to put across than its predecessor, which had a certain kind of tatty gladiatorial grandeur wholly absent here. Still, roll over Quentin Tarantino and tell Robert Rodriguez the news. With Big Fan, Robert Seigel proves that the existential poetics of popular culture have a new laureate. He’s a less crowd-pleasing one, since Seigel’s tendencies are toward Capra-esque Neo-Realism, rather than the hipster argot favored by QT and RR. But when a unique and important voice comes along, it’s best not to carp. You just have to gratefully listen.