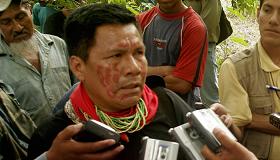 Crude is a governmental and legal procedural documentary that is at its best when it plays like a piece of environmental torture porn. It’s at its worst when it’s lingering over the fact-finding and pious pronouncements that’s been devoted to the fifteen year struggle against Texaco supported by Sting’s Mrs., (and Sundance Film Festival fixture) Trudie Styler. Directed as a solo act by Brothers Keeper and Metallica: Some Kind of Monster co-director Joe Berlinger (whose Sundance catalogue bio for this film ungenerously and rather artfully avoids any mention of longtime partner Bruce Sinofsky), Crude tracks what can only be described as a crusade for reparations by indigenous Ecuadorian tribes people for what Texaco (now folded into Chevron) did to their lands, their health and their entire world over the course of a rapacious quarter century of extracting oil. The built in audience for this film is the same one that initially flocked to Al Gore’s An Inconvenient Truth, but unless Berlinger somehow snags an Oscar nomination for 2009, it’s doubtful Crude will be as widely scene as it perhaps should be—a good cause does not necessarily a fully satisfying movie make.

There are two protagonists in this film, Pablo Fajardo, a young Ecuadorian lawyer leading the attack against the oil titan, and Steve Donziger, an American consultant to the case. Berlinger follows them for years as they make their case in the Ecuadorian courts, which, fortunately for the filmmaker, do much of their fact-finding in the blur of media attention. Chevron’s arguments are given a full if unsympathetic hearing, and it’s hard to argue with that choice, given the rashes that break out on infants within the first twenty days of birth thanks to polluted water, the high incidence of leukemia and cancer among a people unexposed to the modern world before Texaco’s arrival and the open sludge pits and black oil encrusted soil that seethes and froths on almost every inch of inhabited ground.

Crude could have used more of a sense of irony though when Fajardo’s struggle rises to the level of international attention and Trudie Styler arrives on the scene, wearing a sympathetic smile and the pedigree of a foundation funded by royalties from Police album sales. This is a good, articulate and compassionate woman who recognizes that celebrity is a form of currency in the contemporary world and does what she can to shine her own reflected glory on important causes she cares about. But it’s fundamentally absurd that this is the case, and the juxtaposition of Ecuadorian tribal suffering with limousine liberalism is enough to make a teary-eyed viewer unexpectedly guffaw. When Berlinger treats Fajardo’s appearance at the Police portion of Al Gore’s Earth Day concert as some sort of transcendent moment he hits a wrong note, and more importantly one that makes his movie far easier to dismiss than the troubling imagery of corporate malfeasance it contains elsewhere ought to be.