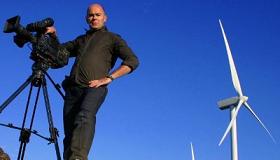 This energetic and fascinating genealogy of the environmental movement going back some 50 years is paired with an impassioned cry for further earth-saving action and will bring moderate theatrical potential to director Robert Stone's socio-political documentary Earth Days.

A step-by-step revisiting of the modern conservation and environmental movements, as well as a celebration of nine key individuals responsible for the first nationwide Earth Day celebrations on April 22, 1970, Earth Days is a well-informed, well-constructed story boosted by the larger-than-life personalities of its subjects, all of whom played a unique role in raising awareness for the environment.

While Earth Days lacks the amazing cinematography of popular nature documentaries like March of the Penguins and Disney's Earth, Stone and editor Don Kleszy prove their filmmaking talents via expert assembly of archival footage, thoughtful interviews and a big-picture understanding of their topic. Earth Days lacks the hot-button timeliness of An Inconvenient Truth, as well as a well-known personality like Al Gore. Still, solid word of mouth is expected. Documentary fans that seek out political fare as well as the growing environmental community will support Earth Days when Zeitgeist releases it August 14th in New York, prior to a modest platform expansion throughout the fall. Expect Earth Days to be Stone's top performer, especially with outreach to various environmental groups. While the film's box office will be slightly below the summer's previous environmental doc, Magnolia's Food, Inc. (due to Earth Days ’ smaller release from Zeitgeist), larger audiences will see the film thanks to a planned PBS broadcast in April 2010.

Stone, who directed Guerilla: The Taking of Patty Hearst and the little-seen Oswald's Ghost, best displays his talent during the film's extensive interviews. Instead of simply allowing his subjects to face the camera and talk, Stone and photographer Howard Shack match the interviews with relevant images that bring their stories to life.

The best interviews belong to the people who've mostly faded from memory, especially activist Stephanie Mills, who caused a commotion by vowing not to have children during her 1969 college commencement address as a way to address overpopulation. Apollo 9 astronaut Rusty Schweickart, the lunar module pilot who became known as the "hippie astronaut," eloquently describes just how much outer space photographs of the Earth helped promote environmental activism. Their interviews, along with the film's other participants, revealed Earth's fragility and the role every human plays in its healthy survival.

Archival footage of the first Earth Day protests as well TV appearances by Population Bomb author Paul Ehrlich make for a fascinating history lesson. In fact, Earth Days ' greatest strengths revolve around the recounting of past people and places important to the environmental movement, especially key events like the gas shortages of the ’70s.

The film's main misstep, a stumble that rests solely with Stone, involves the film's finale, a closing look at the movement today that fails to be every bit as fascinating as the events of the past 50 years, as retraced by the movie.

Earth Days concludes on a solemn note, casting former President Ronald Reagan as an understandable villain to the environment and blaming the cult of personality for his political success. A more hopeful, less abrupt ending would have served the film better.

Earth Days proves there is much to celebrate regarding the environmental movement. Active supporters of the environment, and fans of quality docs, will still leave in high spirits despite the film's downbeat ending.