close
With non-stop action, standout leads will deliver acclaim but not audiences 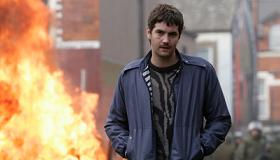 The suspenseful spy thriller Fifty Dead Men Walking will surprise espionage fans accustomed to equal parts excitement and political commentary, two traits typical to most movie dramas dealing with the Troubles of Northern Ireland (think The Boxer and Nothing Personal ). Canadian filmmaker Kari Skogland uses a brutal shooting to launch her film into action. The bloody attack will also cue audiences into the fact that, for this modest Phase 4 Films release, a happy ending is not in store. Based on Martin McGartland's memoir of the same title, Fifty Dead Men Walking is an action packed adventure that grows more suspenseful with each sequence.

Skogland, not yet a household name but deserving, follows the lead of Hurt Locker director Kathryn Bigelow, who distinguished her current Iraq War drama by emphasizing all-out action and tossing moral judgments out the window.

The film's troubled protagonist, Martin McGartland (Jim Sturgess), is a young Irishman who worked as an IRA informant for the Royal Ulster Constabulary from 1989 until 1991. British actor Jim Sturgess impresses with a dead-on Belfast accent, his everyman looks and a gruff demeanor under-used in his recent Hollywood fare Across the Universe and 21. Sturgess is believably conflicted as McGartland, an informant who walks a tightrope between his IRA friends and the British forces. He's also a credible action man, and thanks to his Fifty Dead Men performance, one far superior to his recent work in 21, will receive more action film offers.

Rose McGowan is forgettable as an IRA operative, but fellow Brit Natalie Press, best remembered for her role in the arthouse romance My Summer of Love, provides welcome heartache as Lara, Martin's exasperated girlfriend and the mother of his children. Press' scenes with Sturgess reveal the human toll of Martin's double-crosses.

In the film's final scenes Fergus acts to save his informer and it's a credit to Skogland's script that Fergus and Martin's relationship has grown to resemble that of a father and his son.

Something of a sensation in its native Britain due to extra publicity over McGartland's initial criticism of the film (the speculation is that he felt he was not portrayed heroically enough), Fifty Dead Men Walking will experience modest audiences due to a limited U.S. release planned by Phase 4 Films, the newly formed entertainment company from former Peace Arch president Berry Meyerowitz.

Expect box office similar to the $154,00 earned by the recent Troubles drama Hunger, another title that performed better overseas. Still, the film will generate excellent word of mouth from the small audiences who check out its limited showings and help generate more fans to discover Fifty Dead Men Walking on DVD and home video.

In that regard, Skogland can take ownership of a critics' favorite and all its calling card benefits.