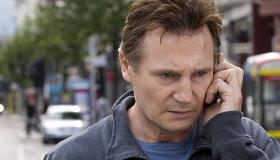 Post-colonialism is a bitch, as so very many English movies demonstrate. If Bobby Sands isn’t starving to death in a jailhouse or IRA terror being brought back to life by the events of Bloody Sunday, negotiators are sitting around long tables deciding the fate of South Africa with their friends from De Beers. From India to Africa, Ireland to Scotland to the USA, it’s clear the long historical hangover from England’s Georgian and Victorian expansionism will never fully abate, and cinema is one major physic the English are drawn to like a tonic for treatment.

As English dramas of political reconciliation go, Five Minutes of Heaven is a rather unique one. For one thing, it is set in the present day, in a world of cell phones and conflicts not fully resolved. Welcome to contemporary Ireland, where Alistair (Liam Neeson) is telling the tale of the murder he committed as a teenager, when the Protestant militiamen he worshipped pointed him at a Catholic dockworker he’d never even met and said, “That man must die.” So Alistair and his friends stole a car, and Alistair pulled a black mask over his head and fired through a window until a stranger lay bleeding to death on somebody else’s floor.

On the sidewalk stood a child—the murdered man’s little brother Joe. Their eyes met, but not in a typical movie moment of remorse, brotherhood or inadvertent understanding. As Alistair says later, had he known this little boy was a relative of the man he’d killed he’d have shot him: such was his belief in the Ulstermen’s cause. In that moment, three lives were destroyed—the dead man’s, the killer’s and the life of the child on the sidewalk who would never forgive himself for something he didn’t do.

But thirty years later, the world wants to forget such bitter things, and so Alistair, who served twelve years for his crime and lives a life of Spartan despair, has been brought together with the adult Joe (James Nesbitt) to go before a TV camera and let each man confront his past for the general public’s enjoyment and the common good. Alistair is participating in this circus because he wants to aide in the recovery of that little boy on the sidewalk. But Joe wants something very different: the “five minutes of heaven” he’ll get if he can stab Alistair to death before the TV cameras and watch him die.

There are two things that are terrific about this very small but frequently very affecting film: the acting by Neeson and Nesbitt is absolutely superb, with Neeson’s keelhauled pugilist’s face and hangdog eyes just perfect for a man broken on his own wheel, and Nesbitt’s darting hare energy and circular features epitomizing a desperate human being who has seen so many sorrows he’s literally been drained of air and thereby of life.

But even more satisfying is the general refusal to make a process like the one the film describes seem easy, or to resolve more than can be resolved about such grievous things. Though it begins with a lengthy flashback to the horrors of Northern Ireland in the 1970s, Five Minutes of Heaven is really about carrying a sad story well beyond the place where most movies would stop. The lasting damage from such traumas and the way it metastasizes down the decades is the true topic under discussion here, and that makes Five Minutes of Heaven more complicated and troubling than many of its type.

More than once, director Oliver Hirschbiegel and screenwriter Guy Hibbert come close to concluding their story on a nihilistic shrug. There are two false endings that leave the audience momentarily thinking Five Minutes of Heaven is saying some things are unforgivable, and some conflicts can never be resolved. So many political movies are drawn to reassuring simplifications that this one triumphs over its limitations (overuse of voiceover for inner character monologues, slightly anemic production values) by taking the darkness in a dark subject seriously. Five Minutes of Heaven is a film that lingers in the mind as a result.