close
Zombie aims to make us feel every brutal blow 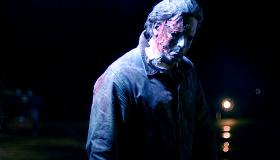 Rob Zombie's approach to the Halloween franchise is clinical. His first installment delved into Michael Myers' psychology as an abused child, as dark and frightening a place as the forest with his heavy footsteps close behind. This second take is medical—the first 10 minutes don't need a machete to upend your stomach. Zombie's fixated with what the doctors have to do to put Laurie Strode (Scout Taylor-Compton) back together again after the ambulance whisks her away from her first/last stand against her psychopathic brother. Several close-ups of stitches and peeled fingernails later and Zombie's viewpoint is clear: he's taking Michael's inexorable killing spree to its brutal extreme, and he wants us to feel every blow. Horror audiences who want their deaths with a jolt of laughs will gravitate to The Final Destination, so opening numbers should be modest, but expect to see Halloween II, like Michael himself, tirelessly stumbling along until it makes good on its humble expectations.

After a decade plus of sardonic slashers and tongue-in-cheek massacres (the best of which was Sam Raimi's recent Drag Me To Hell ), Zombie's straightforward and cruel approach to Michael's brother-from-hell franchise feels oddly fresh. (His idea of humor is cutting from Laurie explaining she's a vegetarian to Michael eating a raw dog heart.) Unlike today's flicks, Zombie never winks, and unlike the sexy '80s screamers, he doesn't stack his cast with bimbos. Last year's nightmare has turned Laurie miserably punk. She and best friend Annie (Danielle Harris) aren't the type to take titillating bubble baths; their spray-painted bathroom looks like a crime scene even before Michael's boots stomp up the stairs. In short, they look like White Zombie fans, which must be a thrill for the goth-billy teens in the theater.

The girls live with Annie's dad, Sheriff Brackett (Brad Dourif), whose character reverberates with paternal love, and set about trying to recover from last year's attack. Laurie's in therapy but beset every night by bloody nightmares (Zombie's cheap way to ensure there's a stabbing every 8 minutes). And though everyone assures her that Michael must be dead, his corpse is still at large.

Meanwhile, Michael's shrink Dr. Sam Loomis (Malcolm McDowell) is on a press tour promoting his latest book on his most infamous patient, and receiving either angry boos or creepy applause. Until Michael gets riled up, Loomis is the monster, an alpha jerk who wears rock star shades and snipes to his assistant, "When I want your opinion, I'll beat it out of you." A killer with his spark would make a great movie. But, of course, we're stuck with Michael, who ties Jason for being Hollywood's dullest mass murderer. The casting of Tyler Mane is as good as the franchise can get—his silent size is scary as heck. He doesn't do much besides lurch and smash. Or, to be accurate, smash and smash and smash—he'd rather stab a nurse 20 times than slice her neck. Halloween II is just that: a death march. Michael's too clumsy a character to invite the audience on a dance of suspense, but if you like your blood thick and your humans miserable, go ahead and follow his lead.