close
Labor, trade and realism between Eastern and Western Europe 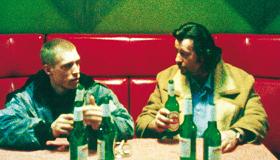 Filmmaker Ulrich Seidl’s practically founded the docu-fantasy genre with Dog Days. The Austrian helmer’s latest offering, Import/Export is set smack in brick cold winter and features a tale about two twentysomethings enduring the mallet-pounding rigors of a blue-collar fate. Each scrappy character sets out on a path—one east, one west—to attempt to shed strife for a better life. Auds fancying a walk on the wild side may feel their hands dirty post-screening but will stand bolder and walk taller afterward.

This breed of outsider cinema works in the same fashion as a Joyce or Dickens novel does, by spotlighting the dire and dreary from the insider’s POV. The topsy-turvy plot neither panders nor pushes. The characters are tossed into real-life settings rather than cooked-up situations. They don’t just enter a prepped room. Rather the housing project where a prostitute is holed-up is a sty where broken windows and damp, rancid, tagged walls inspire cringes. Seidl is a determined auteur, searching in-between the beats where chaos and quiet interplay, and for this his films have a renegade complexion and bring you into a world far from fairy tale. You smell the filth, taste the expired milk and stare long and hard as another suffers before dying.

Pauli (Paul Hoffman) appears at first as a run of the mill Austrian punk who disobeys authority and can’t seem to graduate from his stepdad’s house. Slowly the youth is performing attack dog antics in hopes of landing a post as a mall cop. His training is so intense one would think he’s aiming to become a soldier. Soon enough he’s shadowboxing and transformed into a machine with drill sergeant ambitions. But all the training doesn’t prepare him for a gang assault by a miscreant crew who make a mockery of the minted mall guard, stripping him down to his skivvies and tying him up in the parking garage.

Meanwhile, Olga (Ekateryna Rak) is a struggling Ukrainian single mother working one menial job after the next to keep the lights on in their humble high-rise flat for her tenant mother and infant son. The daytime nurse detail pays “chicken feed” and therefore Olga must drum up a flush gig. She manages to luck into Internet porn. Before long she’s memorizing clichéd lines aimed at getting a rise out of johns onscreen. She’s no natural. During one session she refrains from coming closer to the camera, and, despite one male voyeur’s belligerent protesting, Olga won’t put her thumb up her rear.

Both Paul and Olga are stuck in their own personal purgatories. Paul owes hundreds of Euros to virtually every lowlife and loan shark around. In a fit of desperation, he tries his hand at hustling. Shaking down inebriated suits at a train station goes sour. He realizes quickly that he’s a two-bit thief who can’t unscrew an Oreo cookie. And Olga ditches the smut trade and offs to Austria to tend to a mansion and nanny two spoiled brats. Olga’s unorthodox methods meet disapproval from the matriarch and she’s sent packing.

Ominous and unforced is this woebegone world, captured in pendulum swing style that is purely Seidl. His film promises to jut open many eyes to a breed of worker who wear stock getups and nametags and change the soiled sheets of the infirm. Their stories, however extreme, are given generous time and seasoned with restraint all the while the wandering grimy grounds of regions in the country far-removed from any travel guide. Technically, the sedate yet stunning 35mm camera is there for the ride and somehow never imposes or dominates the content. And the result is a true triumph.