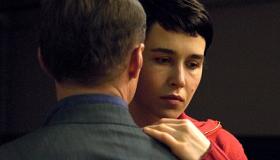 Admirers of brothers Luc and Jean-Pierre Dardenne, makers of the acclaimed dramas L’Enfant (The Child), Le Fils (The Son) and Rosetta, may be surprised with their latest feature, Lorna’s Silence ( Le Silence de Lorna ), which is as much a crime thriller as it is one of their trademark humanist stories. The fact the Dardennes brothers are trying their hand at a different and arguably more popular genre of storytelling may offer a commercial boosts for distributor Sony Pictures Classics, perhaps enough to overcome the Dardennes' dismal box office history and a challenging market for mature international fare. As engrossing and well told as any of their films, Lorna’s Silence should out-earn earlier efforts on its way to moderate box office from adult audiences who favor serious foreign language drama.

Dark-haired and downcast, Lorna (Kosovo actress Arta Dobroshi) is an Albanian working at a laundry in the Belgian city of Liége. Lorna dreams of a better life with her Balkan boyfriend, so when a local gangster, Fabio (Fabrizo Rongione), pays her to marry a low-life junkie named Claudy (Jérémie Renier Renier), she gladly accepts. The deal turns complicated after Lorna attains citizenship. Fabio wants Lorna to marry a Russian Mafioso seeking a work visa and plans to kill Claudy in order to move forward with his plan. Lorna is caught in a moral quandary, a common predicament for lead characters in Dardenne Brothers dramas: whether to allow Fabio to complete his plan or speak up and save a man's life.

The Dardenne brothers, as skilled at creating realistic, lower class characters as any filmmaker working today, show courage for tweaking their trademark social-realism to suit a noirish crime tale with its share of climactic moments. With a finale as believable as its lead actress, Lorna’s Silence is a welcome addition to the Dardenne brothers filmography, their fourth film to win a major prize at Cannes (Best Screenplay at Cannes 2008).

The Dardennes are experts at discovering new talent and Dobroshi delivers with a powerful performance as the distraught Lorna.

Dobroshi appears in almost every scene and strikes a believable balance between exploited and exploiter. Much of the film's mystery revolves around whether Lorna will redeem herself and it's to Dobroshi's credit that Lorna's actions are difficult to predict.
Renier, who appears briefly in another Belgium-set crime drama, the more light-hearted In Bruges, is equally gripping as the doomed junkie Claudy. Together, he and Lorna make a sad but fascinating and complex pair.

After 22 years of moviemaking, the Dardenne brothers remain at the height of their craft with Lorna’s Silence, and one expects more standout, social melodramas ahead. There films remain prestigious acquisitions for specialty companies, although ones with limited financial returns. Lorna’s Silence, as well made as any of their previous features, may find new fans thanks to its crime thriller plot. It would be a welcome achievement for world masters worthy of greater recognition from U.S. audiences.