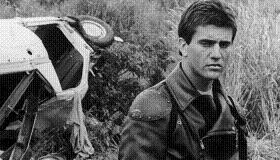 Not Quite Hollywood, featuring Quentin Tarantino, is a fun and energized documentary about a neglected era of exploitation cinema, but it suffers from a couple of pretty critical sins of omission. Since fanboys who flocked to the Tarantino/Rodriguez libido-fest Grindhouse are the target audience, and since there weren’t enough of those to keep that two-fer anthology film from being considered a box office success, it’s hard to see much of a cinematic future for this one except on DVD, cable and as a ghost on YouTube and BitTorrent, where it will probably live forever in the form of unauthorized excerpts and unsanctioned duplications once other prospects play off. If you live in New York or Los Angeles, or go to memorabilia conventions and/or film festivals, you may get to see this film in ideal circumstances—with a theater-ful of obsessives who truly differentiate between one exploding car stunt and another. Otherwise, and with due apologies to Magnolia Pictures, wait for the Blu-Ray.

Not Quite Hollywood tells the story of Australian exploitation movies from their birth in the late ’60s and early ’70s as T&A chunder comedies (the Crocodile Dundee franchise was arguably a sanitized variant of the genre) through period sex farces, mondo films with names like Australia After Dark and their wilder blood and guts titles culminating in the biker and auto-destruct automobile fetish features that took over Aussie sleaze after the international success of George Miller’s Mad Max. Students of American and English trash will recognize the trajectory as a virtual mirror image of U.S. distribution patterns during and before the same period. From the “Nudie Cuties” of Russ Meyer and his followers to the Tom Jones derived corset-and-periwig sex farces of Harry Novak and David F. Friedman (among many others) through the cheeky and proto-punk splatter comedies of Troma Films and Roger Corman’s New World and Concorde/New Horizons periods, Ozploitation exhibits a pattern of growth (or degeneration) seen before. As fun as many of the Aussie titles are, they were part of a larger international creative movement, and based on the timelines Not Quite Hollywood establishes, the Aussie filmmakers usually followed rather than lead the way.

But you’d never know that from watching this nativist survey, which even manages to present a sequence on Howling III: The Marsupials without cleanly establishing that the film was distributed as a sequel to Joe Dante’s breakthrough horror comedy, let alone the many ways the film borrows not only from Dante but from the “body horror” exploitation of early (and Canadian) David Cronenberg productions. At first, the reticence doesn’t make a lot of sense, since something like 90 percent of the exploitation aesthetic is based on cheeky theft, and virtually all the many delightful Ozploitation personalities interviewed present themselves as opportunists and con artists anyhow. But then, the end credits reveal this handsomely mounted and pathologically brisk production as an Australian government sponsored document, and the reluctance to put things in wider perspective seems clearer. Apparently, Aussie dollars mean an Aussie story, even if that has to be achieved by leaving things out.

Through it all QT pops up again and again, in all his babbling, ADD glory, speaking enthusiastically and without any apparent need to inhale or punctuate his thoughts, while unsung heroes of Aussie gore, action and T&A take their bemused and mildly incredulous moment in the sun. It’s a very fitting combination, because watching Not Quite Hollywood is a lot like what the view must be like from inside QT’s head: restless, vibrant, jam-packed to a fault and spilling over with naked breasts, breathless stunts, spittle, blood and a deep-seated belief in the sensory aspects of cinema trumping everything else. If the Aussie exploiters also managed to help train the local technicians who made possible the artsy efforts of Peter Weir, Bruce Beresford and other directors whose work, as one pundit so memorably puts it, “had to smell eucalyptic,” this movie sees that as lamentable rather than glorious. In Not Quite Hollywood, the real glory of the cinema is in a well-decapitated head or a beautifully exploded car. If you share that sensibility even fitfully, this could be the movie for you.