close
Trying to sell a lemon with a paintjob 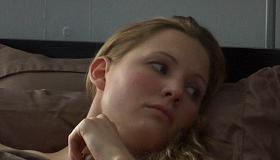 It’s hard to fathom what was going through the mind of Brad T. Gottfred, the writer, director and star of this wannabe-haughty misfire, but here’s a theory: too much and not enough. Mixing theology, philosophy and romance into lumpy, tasteless, low-cost gruel, Gottfred’s story of an author trying to overcome his sexual hang-ups and find true love, hasn’t the intellectual or cinematic resources to remotely tackle whatever the hell it’s attempting. The movie is getting a micro-release, which will result in micro-interest from the public and micro-returns for Cinema Epoch.

What little has been written about the film is not only discouraging, but also suggests the filmmaker’s shallow motives. It seems that, instead of finding an interesting story to tell, Gottfred figured sex and animation sells, so he’d just crap out a movie featuring those elements and give it a rambling, awkward title that acts as its own sales pitch. And thus it was so. Indeed, Gottfred doesn’t seem all that invested in his creation (or isn’t good enough to feign investment), which begins with a brief note of promise, an animated interlude featuring a stick figure God portrayed as a lonely youth. This gives way to a live action fivesome featuring Baxter (Gottfred), a deliveryman and bed-hopper who can only perform sexually by fantasizing about orgies. A self-confessed “lost and confused individual looking for something I may never find,” Baxter longs to find “the one.” He’s searching for meaning in his life, a journey that shares screen time with the parallel exploits of the main character of his unpublished animated book, “A Stick Figure’s 3D Adventure.” These stick figure passages are the only thing worth watching here, even if one figures that Gottfred used stick figures because they’re cheap to animate. Whatever the reason, both man and stick are looking for love and when they find it, they won’t have to imagine orgies with other women to get off.

Given the level of artistry here, the story of a lonely cartoonist with personal issues would have been plenty for the movie to handle. But Gottfred’s not done yet. He’s got too much facile philosophizing and overreaching to do. Baxter’s father is a successful writer of inspirational Christian-themed books (maybe you read, 5 Lessons on How to be a Good Person in the Eyes of God ), allowing Gottfred to smear on some stillborn daddy issues and stake existential ground that isn’t just shaky, it’s porous. Although dad hooks Baxter up with a publisher, Baxter cannot find an ending for his stick figure story because he hasn’t found an ending for this particular chapter in his life. So in a lame act of forced conflict, Baxter is given until the weekend to find an ending for his animated opus or he’ll be forced to accompany his parents back to Chicago where, presumably, people aren’t allowed to write nor have their books published.

One could just dismiss this thing as the work of a trivial talent trying to be deep. But grab your coat and call a cab when he busts out the dime-store Bergman shot compositions in a transparent attempt to turn constipated messaging and flaccid naval gazing into experimental filmmaking. Try not to act surprised, but the performances are not up to the task of selling this material. Somehow, Gottfred coaxed quirky character actor Peter Stormare ( Fargo ) into making a cameo cross-dressed and holding a dog. Everyone else is fair, including Katherine Carlson, stranded as Baxter’s lesbian sounding board, Denny. Lindsay Wray is the pick of the liter as Allison, who finds Baxter on the Internet and may be the savior he’s looking for. But it is to wonder whether Baxter’s search for the 3 dimensional world is just a bit naïve. He sees everything through the prism of sex and feels that Allison, who has her own sexual eccentricities, is The One. Yet maybe, instead of asking Allison whether she’s into “dancing in slow motion naked on the Moon,” he should understand that all problems are solved from the inside out. It’s not as sellable a concept as the ex-wife who sodomizes Baxter with a dildo, but it might go a long way towards whatever truth Gottfred is supposedly seeking.