close
Stimulus for a sensibility revolution in American Comedy…seriously 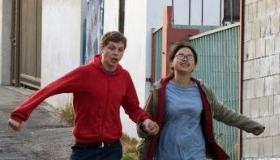 With its lullaby music score and grabby lo-fi camerawork, Paper Heart is like a cross between a Sufjan Stevens album and a gentle satire of the me-me-me school of personal documentary film that festivals like Sundance have done so much to promote over the years. Ostensibly a somewhat self-indulgent doc about performance artist Charlyne Yi’s inability to feel or even understand the concept of love, this is actually a mockumentary hybrid, with an angst-y romantic comedy built out of Yi’s encounters in the real world, a la Borat. The players, who seem to be mostly improvising, are uniformly charming, although Yi’s geek girl lack of charisma takes some getting used to. Michael Cera in particular cements his status as a contemporary Canadian Jimmy Stewart, an apple cheeked everyman whose stammer isn’t so much in his voice as in his eyes. This is a sly, brisk and utterly charming comedy, if a bit slight—a cheap effort with a major star in it and a lot of very accessible heart. Unless indie releasing companies are even more frightened than they seem, distribution is a no-brainer, though mass acceptance is more questionable given the offbeat mix of styles and tones.

In the narrative conceit, Yi and her actual co-writer and director Nicholas Jasenovec (who is played rather delightfully by actor Jake Johnson) road trip around America talking to people about their experiences of love (these stories are all re-enacted using what looks to be pipe cleaner puppetry, in a touch that’s cloying or charming, depending on your tolerance for sweets). Complications ensue when Charlyne meets actor Michael Cera (as himself), a friend of Nick’s who is immediately infatuated with her. The cameras keep rolling, and Yi seems on the verge of destroying her original thesis by reciprocating Michael’s feelings. But as romance tries to bloom there’s those pesky cameras to deal with. And who can follow love’s natural progressions with a wireless mic coiled beside her or his heart?

The world hasn’t entirely figured this out yet, but there’s a thriving alt comedy scene in Los Angeles that’s very different from the Adam Sandler side of the business of funny. The city’s many media opportunities are a magnet for writers and comics of every stripe and hue, and not everybody with talent fits into the cookie cutters the film and TV business are still most comfortable trafficking in. Or rather they do, but only intermittently, as a way of staying in the game—the rest of the time they hang out, develop failed TV pilots, create little projects for peer approval and their own amusement and wait on residual checks.

Paper Heart is emblematic of the kind of gentle, character-based and virtually punch line-less comedy that’s been percolating inside LA’s clubs and Bob Odenkirk’s web videos in recent times. If it flukes a wide release and finds an audience it could mark the beginnings of a sensibility revolution in American humor—a quiet insurrection that’s been gathering force in the very shadow of the industry proper thanks to the ability of comedians and writers to use tiny equity waiver clubs and proliferating desktop media technologies to produce their own work. But even if mainstream success doesn’t happen for Paper Heart, Jasenovec and Yi have taken some measurable steps forward with this well wrought and often lively work. Anybody who cares about movie humor can only hope their comedy club peers will be willing to follow.