close
The best film to come out of Sundance. 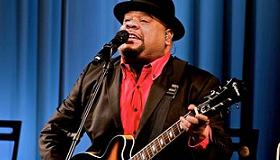 Nothing at Sundance 2009 will be better than Spike Lee’s amazingly cinematic transcription of Passing Strange, the sensational Broadway musical by journeyman rock and cabaret artist Stew (leader of LA band The Negro Problem) about his own life and struggle for identity. Tender, sexy , funny, moving and profound, Passing Strange bears comparison not just to the great works of the American musical theatre but to literary landmarks like James Baldwin’s Another Country and (especially) Ralph Ellison’s Invisible Man. Lee has wisely resisted the impulse to make Passing Strange into a conventional movie musical, for this would kill much of what’s special about this intoxicating and vivid work: the stage is where Stew has lived his life and the struggle he enacts between his sadder but wiser older self (he anchors the work as its narrator, lead vocalist and principal guitarist) and the eager and heedless young striver he once was belongs in the live arena and not on some airless soundstage. But don’t make the mistake of thinking this is some trivial Spike Lee hobby-horse—a straight-to-TV toss off job put together on a lark. Lee (and his cinematographer the great Matthew Libatique) has lavished craft and attention on Passing Strange, bringing Stew and musical collaborator Heidi Rodewald’s complex entertainment to vivid visual life, and this is both a major effort in the canon of one of our greatest living filmmakers and a worthy way of celebrating the 20th Anniversary of Lee’s profound career-making masterpiece Do the Right Thing. While video production values and a Broadway stage set will be major stumbling blocks to theatrical distribution, this project is so buoyant, so rockin’ and so intelligent it’s hard to imagine that with Lee’s name attached there isn’t some sort of a market for this property. If ever a title screamed out for a digital distribution into the same theatre circuit that has proved so lucrative for live broadcasts of football games, Miley Cyrus concerts and Metropolitan Opera productions, it’s this one.

Like Lee’s 1988 film School Daze, Passing Strange is an autobiographical treatise on black identity. “Youth” (Daniel Breaker) is an upper middle class black teenager in Los Angeles, living a comfortable but unfulfilling life while chomping at the bit to be a musician. He watches the contradictions in the world around him with a wary and claustrophobic eye, resisting every social pressure that seeks to define him.

Youth’s single mom (Eisa Davis) lives a good life in a good house with an abundance of material possessions, but downshifts into ghetto-speak on the rare occasions when she can force Youth to attend mass at a local Baptist church, where he dabbles in punk rock and recreational drugs with other members of the church youth choir. Youth’s an explorer with the arrogance and certainty of an adolescent sense of mission, and his quest is for something he calls “the real.” But what is “the real” when everyone Stew meets—both in LA and in a later expatriate period in Europe—wants him to role-play their own “mean streets” impression of black identity and take a shape Stew has no frame of reference for, but finds himself willing to assume? And what is reality to an artist who grows adept at hiding inside shifting and adaptable stage personae as a way of avoiding real love and all the cloying human attributes of daily life?

Alternately melancholy and ferociously rocking as he watches his former self take the same large risks and make the same wrong turns he himself made in life, Stew is a riveting presence, who presides over the world he’s lovingly but unsparingly recreated like some kind of rueful patriarch. His story and his lyrics have the bracing and unexpected quality of specificity and a unique life lived to the fullest; as Youth bounces from LA to Amsterdam to Berlin, blossoming and supping from the fruit of every tree; he becomes a sort of black Steppenwolf, but one engaged in a constant dialectical dialogue with the man and the artist who sprang from him. Near the end of the show, when Stew and Youth stand face to face and confront each other over Stew’s lingering remorse about his mother’s death and the many ways he took her for granted and let her down, the already profound Passing Strange reaches a high note of human complexity. For Stew never takes the easy way out, nor lets either his former or his present self off the hook for what is, what has come from it and what can never be undone.

To put it plainly: Passing Strange is a work of genius. And there’s nobody I can think of who shouldn’t see it.