Ponyo (Gake no ue no Ponyo) 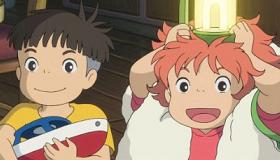 Academy Award winning Japanese anime legend Hayao Miyazaki ( Spirited Away, Howl’s Moving Castle ) has joined hands again with Disney for the Americanized version of his latest, Ponyo On The Cliff By The Sea, a loose adaptation of Hans Christian Andersen’s The Little Mermaid. With a starry, first-rate voice cast and the shortened name, this Disney-fied version remains a magnificent animation wonder and a pure delight. In any language, Ponyo is a real treat for moviegoers of all ages, especially the younger ones. U.S. box office for Miyazaki’s other acclaimed titles has been meager by ‘toon standards but this more accessible entry, going out with an 800 theatre break (the helmer’s biggest ever in the States), has a chance to do considerably better as a late summer attraction from the Mouse House. Awards consideration would also seem to be a no-brainer.

The plot revolves around a feisty, young, human-loving mermaid/goldfish (Noah Cyrus) who becomes stranded off shore and is rescued by a 5 year old boy named Sosuke (Frankie Jonas) who lives on a Cliffside. Taking ownership of his new find he names her Ponyo and promises to always take care of her. Meanwhile, Ponyo’s concerned father summons the oceans spirits to bring her back home. After arguing with Dad, she breaks away from him and magically finds a way to become human. A big storm brings her back to the cliff where eventually a test will determine if she can stay human or must return to fish form.

A welcome relief from the onslaught of 3D CGI animation rampant in theatres these days, Ponyo reflects 68 year old Miyazaki’s impeccable artistry and vision. Using traditional anime to create a timeless and enchanting tale, Miyazaki has loaded Ponyo with fun, excitement and stunning images. Although his works have been box office smashes in Japan and around the world (this one has earned $182 million internationally so far), they’ve been a tougher sell in America where Miyazaki’s gentle, mystical approach hasn’t always spelled big bucks.

Smartly, Disney has enlisted producing heavyweights Kathleen Kennedy and Frank Marshall, along with their animation chief John Lasseter, to shepherd the transition for American audiences. The best decision made by the producers was casting strong voicing talents like Matt Damon, who plays Koichi. Cate Blanchett and Liam Neeson voice Ponyo’s parents with great conviction. Tina Fey is spot on as Sosuke’s mom, while the irrepressible multi-Emmy winning trio of Cloris Leachman, Lily Tomlin and Betty White play three elderly women in the retirement home where Fey’s character works. Another clever idea was casting Noah Cyrus (Miley’s younger sister) as Ponyo and Frankie Jonas (the youngest of the Jonas Brothers) as Sosuke. Both leads are getting major Disney Channel traction right now and marketing potential is obvious.

With Disney’s expert help in broadening his audience, the great Miyazaki has topped himself artistically in every way here and the results should be encouraging for one of the true masters of the medium, and also for lovers of truly inspired animation.