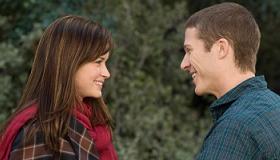 Adorable and (minus one brief scene) absolutely perfect for the ambitious tween and teen girl demo, Post Grad is an update to the driven-girl-unmoored-by-the-real-world trope explored in past films like Reality Bites. Alexis Bledel ( Gilmore Girls, Sisterhood of The Traveling Pants ) plays Ryden, a girl at the top of her class. While Ryden knows precisely what to say and how to play the game, promptly after graduation she finds reality can’t conform to her expectations. It makes sense. She jumped through all the hoops—now she wants her prize. She just didn’t realize the claw-game was rigged. Like its protagonist, Post Grad plays well by the (genre) rules but still manages to be surprising, charming and quite funny. That said it should be popular fare at slumber parties for diligent girls well into the next decade. Theatrical prospects seem good, but DVD prospects look stellar.

We meet Ryden on the day of her graduation. In direct address to a video blog protocol we’re befriended in that sort of way you’re befriended on Facebook. She tells us she’s had a plan since she was young. It includes getting good grades, going to a good college and getting a job at Hepperman-Browning, the best book publisher in Los Angeles. This post-MySpace, late-CNN intro both humbly introduces Ryden and (while facile in a way) also hints at the over-busy universe she’s done quite well to fit into. She’s smart, savvy, diligent and assertive—all the stuff you need to be to get rejected by any company worth its salt. And that’s just what happens. Ritually upstaged by the valedictorian of her college and turned down for jobs at dozens of companies, she suffers the summer after graduation at her family’s home. In the process she meets a hot Brazilian (Rodrigo Santoro) and wounds her ever-loyal best friend (a lovable Zach Gilford) who’s long held the torch for her.

A film centered on a female protagonist can’t really follow the non-conformist lead of other late coming of age stories like Rushmore or Adventureland. Add that to the fact that Ryden’s greatest accomplishment (her conformity) is also the thing that makes her the least able to live happily and we have a noteworthy subtext. Ryden’s family is odd in a myriad of charming ways: her mother, played by the famously “out” Jane Lynch, prizes her garden gnomes; her father, played perfectly by Michael Keaton, wants to make his millions selling belt buckles on the internet; her grandmother, the always fantastic Carol Burnett, is making a career out of her slow death. While Ryden goes from interview to interview, repeating lines like “what I lack in enthusiasm I make up for in vision,” the thing it seems she’s really mastered is mimicking the words. What is this vision she’s talking about? Her father sells belt buckles. It’s odd but at least it’s inventive. What she wants, on the other hand, is magnificently inflexible.

Though the final few scenes may present you with a bit to ponder (how she got her cake and ate it too) it’s still a hopeful wish fulfilled. And while I’d rather have seen her make good with those belt buckles, what she does will keep young girls believing adulthood is grand, and really, what else is so important?