close
Not built for the long run 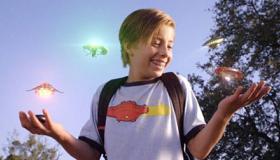 One time Renaissance (and bandito) filmmaker Robert Rodriguez has revealed a bottomless capacity for fashioning films for nuclear families—folks who boldly leave the casserole in the oven and minivan the crew to watch tots become temporary masters of the cul-de-sac. With Shorts, the filmmaker’s technical skills are on full-display. This sassy kid caper promises to fill rows with Twizzler-crazed, soda pop hopped-up underagers, ready to ride this movie like the latest and greatest Magic Mountain rollercoaster.

Taking pages out of The Neverending Story and slathering on Little Rascals barbs, Shorts is reinventing the wheel (not building some new apparatus altogether). There’s a weakling named Toe Thompson (Jimmy Bennett) who keeps getting slamdunked into trash bins by the proverbial bushel of bullies that rule the yard. The bullies are led by a pig-tailed meany named Helvetica, played by standout actress Jolie Vanier. If only this picked-on loner could get a break! A lifeline arrives from some unknown galaxy: a meteor landing produces a wishing rainbow rock.

Toe lives in a futuristic little suburban cutout of a company town called Black Falls; so named after the conglomerate chairman Mr. Black (James Spader). The villainous top dog lords over a tech empire that employs the mom and pop citizenry, all of whom have become servants to its handheld do-everything gadget. Called the Black Box, the phone device can grate cheese and transform into a bullhorn on command. Few talk anymore. All the chatter, be it argument or love missive, is channeled through the black doohickey.

Like info on the eponymous Black Box, the film’s storyline quickly shuttles through scenes. Back to the past then fast-forward. Zipping frames rewind willy-nilly. If you can stomach an omnipotent driver who likes to skip all the parts but the punch lines then this flick is it.

Toe Thompson gets his revenge on Helvetica and her clan by the help of wished-for miniature aliens. Thereafter, the rock goes astray and so does the loyalty of Toe’s so-called “friends.” But it’s when the rainbow rock lands in the clutches adults that all hell breaks loose. When Mr. Black realizes the rock’s powers, he finds something he can love more than the Black Box.

There’s this pressure that tugs at directors, it tells them to go soft and champion safe projects fit only for children. Surely, a talent like Rodriguez can see beyond the short-term and know that in time kids grow-up. The boogeyman R-rated feature will be tepid territory once they can order a cold one. Even if the technically tight Shorts is not intended to take precautions surely there are ways to articulately speak to the young audience with iambic pentameter rather than speed-reading through story time. Trimming the flashy CGI and giving attention to character and substance aren’t failsafe tactics, but they’re tactics that simply play better. Any Jim Henson piece proves this point; it may not be as slick and sexy but the effects will be special. And the final product will command a shelf life lasting longer than it takes to lick down a popsicle.