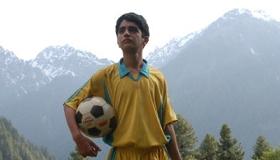 Sikandar tries to run as a dramatic pony but is way out of its element. The acting is far from arresting and however fancy the setups and slickly snapped, sliced and served scenes—it feels debased. The film plays to knee-buckling timidity. Loyals to the genre will turn out to exercise their patronage however don’t expect a new wave of discerners to stampede into theater houses to get a look-see.

A scrawny teenage boy named Sikandar (Parzaan Dastur) roams his school grounds covering his face to avoid another dose of punishment by his jock adversaries. He’s not much of a soccer player and his teammates call him out on his rank athleticism. Despite this, the 14 year old is a choice candidate to be picked for martyrdom. Sikandar lost his parents to a terrorist attack over a decade ago, and despite his caring aunt and uncle he has nobody to call a friend and carries a limited scope of the world.

All seems to turnaround when he meets a young looker named Nasreen (Ayesha Kapoor) who befriends the loner off-campus. Despite the lack of any scenes inside the classroom, it’s indicated that the school is in strict accordance with the Islam faith. Nasreen wears a head scarf and kids worship during school hours. Sikandar and Nasreen take a stroll through the forest and stumble upon a pistol. The weapon is pure, flexing power. And Sikandar is psyched.

When boys at school try to harass the toothpicks-for-arms Sikandar, he brandishes the piece and nobody questions his might again. Meanwhile, the adults are jockeying for position to retaliate after a bomb was placed inside a soccer ball. A kid passing it to a friend in a marketplace later detonated the ball. The devastation was widespread. Hungry for reprisals a militant sect groups, led by a brutal sort that offs one of its own soldiers without cause. This camouflage-uniformed army is led by a cowboy who wants to go after any possible enemy of state—even if it’s a young boy or girl.
Sikandar gets carried away with the gun and scares away his gal pal Nasreen. He’s been target practicing in the hills with militants and has become a good shot. Soon enough, he gets his first assignment to make a hit on a politician. The assassination attempt goes awry but that doesn’t stop authorities from hoping to get their clutches on the disturbed youth. On the lam now, his only hope rests in the mullahs who can offer some protection. Trouble is he’s being played like a shofar. The friends he thought were genuine are potential deceivers. And more and more blood is shed at his expense.

The tale has a few twists. But that’s if you can actually sink into it. Not so easy to do with the ho-hum acting and the poor, clearly overdubbed sound quality. The film could have had potential if the dollies, towers and movie magic acts had been left back in Mumbai. The script could also have gone through a few rewrites—lots of clichés and blah dialogue and stares into nowhere. “Remember, every dog has his day!” Wouldn’t matter if the picture would bookend at 90 minutes. But this one goes well past the century mark. The subject matter is no joke and deserves its screen time. It’s just that screenwriter/director Piyush Jah made a film that does only disservice to hot bedded affairs because he avoids stressing the essentials—content and performance. Watching the piece is akin to seeing a good rehearsal shot by a competent technical crew. Nothing more.