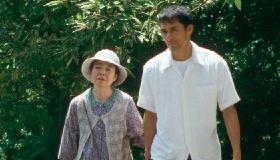 Still Walking, Hirokazu Kore-Eda’s latest effort, further entrenches my belief he should be considered one of Japan’s Living Treasures. This middle-class family drama, in the vein of Yasujiro Ozu’s 1953 masterpiece, Tokyo Story (but with a deeper resonance of grief and guilt) has been a robust festival hit. Given the international arthouse success of his oeuvre, Kore-Eda’s Still Walking should find an appreciative theatrical audience.

The film observes the homecoming of the recently unemployed art restorer Ryota (Hiroshi Abe), with his widowed wife (Yui Natsukawa), her 10-year-old son) and his sister (You) to the seaside home of their elderly parents. During the course of 24-hours together unspoken resentments and unresolved conflicts simmer like pots on the matriarch’s stove.

The purpose of the multigenerational rendezvous is the annual commemoration of the beloved eldest son and brother Junpei’s tragic death 15 years earlier. We don’t know if Junpei was as perfect as those left behind remember him, or if theirs is a form of survivor’s guilt. Each of the parents carries a personalized form of hostility toward Ryota. The father (Yoshio Harada), a retired physician with little interest or patience in family gatherings, counted on Junpei to follow in his footsteps and take over the clinic, which is still located in the family’s home.

The mother and her daughter busy themselves with the most quotidian of cooking chores: peeling carrots and daikon, salting soybeans, boiling pork, peeling shrimp, shucking corn, and frying tempura. The soundtrack’s chopping and crackling sounds and the close-ups of food, along with the family members’ interactions, invite the viewer into the film and provide an observational, yet intimately nuanced encounter with these uniquely dysfunctional relatives. Just when we assume that the mother is a long-suffering martyr to her callous husband (who had an affair several years earlier), Kore-Eda reveals a vindictive side to her. Every year she invites the boy Junpei gave his life to save from drowning. The overweight, profusely sweating, clumsy boy just graduated from college at the age of 25 and can’t find a job. We get the feeling she believes it wasn’t an even exchange of lives when the mother admits she invites him every year to “make him feel bad.” She “can’t let him off after only 15 years,” she tells a stunned Ryota, and confesses that, “not having someone to hate [for her son’s death] makes me feel worse.”

But Kore-Eda’s candid portrayal of family dynamics is countered with an almost transcendent touch when, while visiting her son’s gravesite, the mother believes that the appearance of a yellow butterfly signifies his presence. Perhaps the most poignant interpretation of Still Walking is that despite an individual’s many regrets and sorrows, life moves irretrievably forward, oblivious to human suffering.