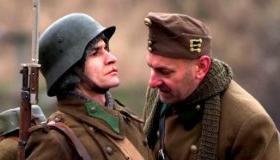 Winner of Un Certain Regard at Cannes, this title is as sweeping in scope and vision as it is in viscera. György Pálfi’s breathtaking visuals recall both the ingenious camera movement of the Soviet New Wave and the edgy poetics of Prague New Spring. Meanwhile, the narrative content of Taxidermia pairs the beauty of this cinematography with the gruesomeness of raw flesh. The story of three generations of Hungarian men captures three phases in the cycle of Hungarian Communism (the barren WW-II era, the over-fed Post-War period and the depressive, if non-descript, modern day). In the process, the three men—grandfather (Csaba Czene), father (Gergely Trócsányi) and son (Marc Bischoff)—combine to erect a related exploration of the cycle of life, as indicated by their obsessions (masturbating, eating and taxidermy, respectively). Meanwhile, this treatise on the body and politics actively interrogates the magic that jarringly joins the monstrous to the beautiful. Not for the squeamish, this is a grand achievement in every sense. Audiences considering attendance will be divided by their attraction to the film’s foreign/arthouse accomplishments and its astoundingly gross content.

With as much body theory as a short story by Georges Batailles, Taxidermia begins with its progenitor, a lowly WW-II era orderly, masturbating. Stationed at the house of a lieutenant, Vendel (Czene) is mistreated and friendless, his sole escape is self-pleasure. When the lieutenant’s wife approaches him for a rendezvous, the only place they can lay in the barren, freezing barn where he sleeps, is on the carcass of a recently slaughtered pig (you see all of the slaughter, by the way). The result is a son with a pig’s tail. The lieutenant opts to raise the boy as his own and shoots Vendel for his transgression. The son, Balatony (Trócsányi), finds fame and fortune as a Sport Eater. So famous he has a regurgitation technique named after him, he marries another prominent sport eater and on their wedding night his bride has sex with a colleague. She gets pregnant, they stay together and Balatony raises what may be another man’s baby while Sport Eating goes slowly out of fashion. In an unspecific present day, Balatony’s son (Bischoff) is an anorexic taxidermist. Supposedly obsessed with eternal life, he perseveres the carcasses of animals with the care and craft of an artist. It’s the son, who lives in a universe of somewhat unholy preservation, who stops the cycle, and turns his own body into a fetishistic spoke in this family’s wheel of life.

A meditation on creation that is zealously masculine, Taxidermia seems to bastardize the feminine model of the woman’s three stages (Maiden, Mother and Matriarch) by shifting the focus to the male sex. Pálfi‘s direction emphasizes revolutions. A breathtaking scene involving a wooden bathtub uses the tub as a transitional piece and a metaphor. The camera rotates around it in 360 degree sweeps and each time we pass the base of the tub and come out around the other side the tub is filled with something new: two women bathing, wet laundry, vegetables, a pig carcass, a newborn baby. This tub, where the carcass was kept when the lieutenant’s wife came calling, is a logical tool to demonstrate cycle, and as it does it also provides a sense that the protagonists are somehow out of this loop. The greatest evidence of this alienation is the film’s final scene. After the grandson has made his own body mountable for museum use, a narrator (the same who opened the film) discusses the “piece.” ‘The experience can’t be mounted, the body can be.’ It’s as if to say there is a tragedy to being in a form; or if it’s not a tragedy, it’s a conundrum indeed.