close
The same old tricks with a different look 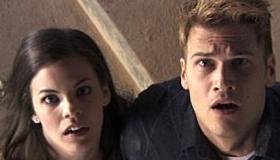 After a summer full of 3D flicks aimed mostly at younger audiences, adults can now revel in the guilty pleasures of The Final Destination ( TFD ). The fourth installment in the series is certainly one instance of technology elevating (slightly) what could otherwise have passed for straight-to-DVD fare. While it’s far from a classic in the world of suspense, TFD should rake in more than enough cash theatrically to ensure that this won’t be the final destination of the franchise.

The way that the Final Destination films build their narratives has become set in stone, and TFD doesn’t attempt to stray too far. Nick (Bobby Campo) is able to save his girlfriend, two of his friends, a security guard and a couple of other bystanders when a premonition causes him to exit a racetrack right before a fatal accident would have killed all of them. Yet since Nick and Co. have dodged death and somehow set the universe out of whack, the unseen force that represents Death is determined to make sure that everything is returned to its natural order. In typical franchise fashion, one by one, the people who made it out alive meet their fates. Audiences have bought the premise three times already, and there’s no reason to believe they won’t go for it again. It’s no wonder that the original Final Destination became a sleeper hit. The idea behind these flicks comes with infinite potential; however said potential goes mostly untapped here. As morbid as it may sound, director David R. Ellis and screenwriter Eric Bress simply do not have enough fun killing off the characters they’ve created. The filmmakers opt for either lame, coincidence-induced fatalities that seem to drag on forever or abrupt, “Gotcha!” moments. There’s little enthusiasm to be found. Ellis and Bress are simply going through the motions. It’s hard not to watch TFD and wonder what true masters of suspense would have done with this material. How would Alfred Hitchcock have done away with these superficial twentysomethings? What kind of existential malaise would The Coen Brothers have injected?

Just like in most sequels of its kind, the acting in TFD is dreadful. Even the incredibly talented Mykelti Williamson ( Forrest Gump, Heat ) is brought down with the ship. Then again, the cast isn’t exactly working with the script for North by Northwest here. Painfully corny lines are plentiful.

The 3D saves much of the film. Even moviegoers who may still be skeptical of the whole 3D movement will get a kick out of what Ellis manages to accomplish with the technology. Plus, as nudity is practically a requirement in most R-rated horror sequels, there’s something for all the guys in the audience to drool over. TFD is so unabashedly mindless and the characters so ironically flat, that watching things pop out from the screen is literally the only real dimension the film has to offer.