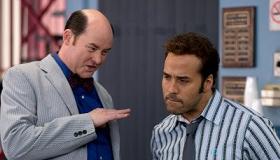 A clever comic premise finds an expert but oddball car sales team coming to save a Temecula, CA dealership, but fails to live up to its Superbad potential. The latest big screen laugher from Will Ferrell and Adam McKay's Gary Sanchez Productions, The Goods: Live Hard, Sell Hard offers only two belly laughs throughout the entire movie, too few for it to gain the positive word of mouth necessary for it to become an end-of-summer comedy hit. Neal Brennan's debut feature, following his small screen success directing The Chappelle Show, will enjoy moderate success as the weekend's only new wide-release comedy. With chances of any crossover or repeat business unlikely, The Goods, starring Jeremy Piven, will rank with another Gary Sanchez Productions underperformer, Semi-Pro.

Goods ' best laugh occurs at the beginning. Car sales guru Don Ready (Piven) cajoles a flight attendant and her fellow crewmembers to let him smoke in-flight in memory of the glory days of air travel (“After all, when people were allowed to smoke on airplanes, we put a man on the moon”). Before long, Ready and his car lot tricksters (Ving Rhames, David Koechner, Kathryn Hahn) have turned the plane into a mile high party.

Once in Temecula, Ready and Co. pull out all the stops familiar to fans of the 1980 Robert Zemeckis comedy Used Cars in order to sell every last auto at the dealership. Non-stop wisecracks, multiple gags involving erections and homosexuality and a silly romance between Ready and the car lot owner's daughter (Jordana Spiro) help push the story to its anti-climactic conclusion.

Fans of Piven's performance as outrageous Hollywood agent Ari Gold on HBO's Entourage will be disappointed by the two-dimensional nature of Don Ready. The number of missed chances at solid laughs is shocking. The only other big laugh involves a cameo from Will Ferrell playing a colleague of Ready's involved in a hilarious skydiving stunt.

Other pranks involving the outrageous behavior of Ready's sales crew have been done better in other comedies. In fact, if one were to list The Goods in terms of laughs with other recent end-of-summer comedies it would rank below Superbad, Tropic Thunder and Pineapple Express. At a karaoke performance, Ready calls a Jonah Hill look-a-like in the audience "Superbad," but the joke comes off as an act of jealousy.

It's disappointing writers Andy Stock and Rick Stempson fail to come up with something fresher and more outrageous for The Goods. After all, few comedies can claim such an extraordinary comic ensemble: Piven, Rhames, Koechner, Hahn, Ed Helms from The Hangover and James Brolin, the latter in fine support as the closeted owner of Selleck Motors.

For Brennan, who still retains respect thanks to his work on Dave Chappelle's Show, his missteps on The Goods are proof that feature length comedy is ten times more difficult than sketch comedy. While The Goods will fail to succeed as a theatrical release, its home video and DVD audience will prove to be substantial with a guaranteed unrated version.

Film companies who seek out business with Gary Sanchez Productions will see The Goods as a rare misstep from the comedy factory. Piven's career will also continue unscathed. Brennan, however, will have to work harder to get past The Goods. After all, the faults of the film, its missed opportunities, lie mainly with him.