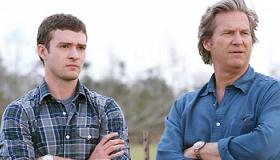 If Zach Braff looked more athletic, he would have fought Justin Timberlake to play Carlton Garrett, a minor league Texan baseball player tangled in a major league coming of age crisis. When Carlton's mom Katherine (Mary Steenburgen) is hospitalized with a hole in her heart, she refuses to go ahead with the surgery until he retrieves his estranged dad Kyle (Jeff Bridges), a former baseball superstar, from a convention in Ohio. Writer/director Michael Meredith's trek through the Deep South/human heart is contrived, slight and littered with platitudes; it's a screenplay that feels written by numbers. But excellent performances make it deserve more attention than this late summer dump, which, like Bandslam 's much-decried marketing, seems designed to make it earn even less money than it could.

Bridges' hammy ball player owns the film. He's an empty, charming motormouth who years ago retreated into self-parody, a former Astros great with time for a million fans (and a million drunken anecdotes) but not for family or real friends. Kyle is slippery and agreeable. He'll consent to go home to see Katherine, but Carlton doesn't trust him and with good reason—as soon as they get to the airport, Kyle's laid some convenient booby traps to excuse himself from the trip. Against Justin Timberlake's manchild, Bridges takes charge of the camera in a rout.

This isn't Timberlake's fault: his Carlton is a wimp. He's an athlete, sure, but from scene one Meredith is out to prove he's sensitive and writerly. One of the film's first lines is his coach (Ted Danson) sniping that "Baseball players don't say things like 'eluding.'" We're meant to believe that he can't even tell his ex-girlfriend Lucy (Kate Mara) he still has feelings for her even though they're still such good friends, he can knock on her door at midnight and she'll along on his quest for papa—despite having an off-screen boyfriend who never registers as a love rival. Before writing Timberlake off as an over-reaching pop star, rent Nick Cassavetes' Alpha Dog —his good time pot dealer is charismatic and fully alive, such an inverse of this aimless jock that I can only conclude that here he's just following Meredith's orders.

Between bit parts by Harry Dean Stanton, Lyle Lovett, and the lovely Ms. Steenburgen, there's enough talent onscreen that it's surprising The Open Road feels this threadbare. Though much of it is spent on the back roads of Kentucky, it's the type of claustrophobic drama where not one but two characters wear symbolic necklaces. There's a few moments when it snaps to life, like when Bridges is forced to feel an emotion for the first time in decades, but ultimately the most honest quality it has is that it knows that bastards are likely to stay bastards, and it's not going to fool us into dreaming different.