The Private Lives of Pippa Lee 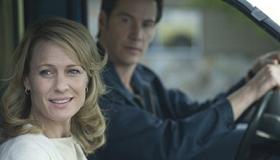 With a stellar cast including Robin Wright Penn and Monica Bellucci and the assured hand of Rebecca Miller in directorial command (Miller also wrote the novel upon which the film is based) this should draw in the literate crowd—and they won’t feel short-changed.

This intense and claustrophobic drama gives Robin Wright Penn a gift of a role as Pippa Lee, a woman in her prime who is happily married with two grown-up children. Over the years she has honed her skills as a generous hostess and an excellent cook. Her marriage to legendary publisher Herb Lee (Alan Arkin), who is 30 years her senior, is a relationship based on partnership. Naturally she wants the best for them on the threshold of their later years.

When Herb turns 80 the couple move out of their luxury home in New York and into a formidable retirement village in Connecticut. This is an idyllic world that promises to allow the pair to spend their remaining time in quiet comfort. But instead of tranquility the move proves the catalyst for Lee to confront the demons from her past she had previously managed to ignore. The sea change is partly instigated through her relationship with a younger drifter (played by Keanu Reeves).

Miller thereafter cues plenty of flashbacks and flashforwards as she attempts to fill in the background of childhood and adolescence, which has plunged this woman to the verge of a nervous breakdown.

It’s all beautifully written and observed as you might expect from someone of Miller’s pedigree (daughter of the legendary Arthur Miller). Strong performances match the production value: particularly those contributed by Penn, Reeves and Arkin. The mood swings, though, tend to be so extreme that it leads to an overly bumpy ride.

Also, many might find it rather too indulgent for comfort, but underpinning it all is the fine cast (there are striking turns, additionally, from Winona Ryder as Pippa’s absent-minded friend and Monica Bellucci as Herb’s first wife) and Miller’s acutely sensitive and often very funny script make it a welcome respite from all the empty blockbusters going the rounds.