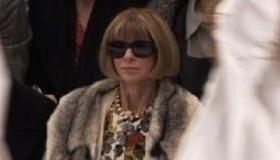 [The reviewer is well aware of the official claims about this film, that it is unauthorized. However, further research indicates the following: 1) That the filmmaker had another concept for his movie when he approached Vogue, that Wintour didn't like it, and that she countered with the notion of a documentary on Vogue 's September issue—in other words, the film was Wintour's idea. 2) That Wintour was shown the film as a work in progress and allowed to give notes and suggestions, many though not all of which were taken. If this constitutes an unauthorized documentary in today's incestuous media environment, that's sad but so be it. It does not constitute an unauthorized documentary for me. The distinction is more than a semantic one, and the reviewer prefers neutrality as Edward R. Murrow or Fred Wiseman might define it—the subject is observed, the filmmaker makes the movie. -RG]

Director R. J. Cutler’s The September Issue has a built in audience of millions if there’s a distributor out there who knows how to market what’s effectively a period piece about the pre-recession world of high fashion to our increasingly desperate economic times. Cutler’s film is an authorized documentary about Vogue Magazine, meaning its subjects had some form of approval over its content, and while The September Issue bears some of the hallmarks of that ignominious tradition, it ends up being a far better watch than it probably has any right to be. The audience that dreams of being supermodels or wants to see powerful women at the center of their own universe is a vast one, and in the right hands this movie could do measurable business—by documentary standards at least.

On the downside, there are several suspicious talking head interviews that seem stylistically out of sync with everything else in the movie and give the appearance of having been hastily inserted to humanize Vogue editor Anna Wintour, who is simultaneously The September Issue ’s nominal protagonist, the alleged inspiration for the fiendish fashionista in The Devil Wears Prada and a very cold kettle of fish indeed. When Wintour’s publisher baldly states that Anna is misunderstood by those who think her an ice princess it’s almost as if he’s seen the movie, which he probably has. Anna herself uses her talking head interview to show a sudden warmth toward her chief collaborator, the brilliant stylist Grace Coddington—a generosity Wintour demonstrates nowhere else in Cutler’s copious documentation of the daily business of putting together a monster fall edition under Wintour’s watchful and often inscrutable eye.

Fortunately for Cutler, Coddington is the ideal foil for Wintour’s pursed mandarin; as in any marriage of opposites, the voluble expressiveness of one partner illuminates the shadowy recesses in the other. Where Coddington is gregarious, articulate and forthcoming on every topic, Wintour spends much of the movie literally biting and pursing her lips, as though the camera’s presence were causing her to hold her tongue. Coddington, a 60-something former model who posed for Lord Snowden, has embraced her age, going largely without make-up and wearing each wrinkle like a badge of honor or a dueling scar. Wintour, by contrast, is as lean as a 19 year old with an unlined face that at least gives the appearance of discreet surgical artistry, and her Boeing Boeing stewardess wardrobe is just as she must have dreamed it would be back in the swinging London of the 1960s, when Twiggy reigned and a young Anna Wintour was prescient enough to write on a school form about her life’s ambition: to someday edit Vogue Magazine.

The September Issue is also a process documentary, meaning it shows something being created, and however Vogue ’s publishers might hope to stage manage their efforts, process has its own truth. Wintour is obviously quite good at what she does—she’s decisive, confident of her own taste and capable of honoring lesser talents. This is especially true where there’s a power imbalance, as with Thakoon, a young fashion designer Wintour believes in and pushes into a lucrative GAP contract, or with her idiosyncratic in-house accessories guru, the gargantuan and eccentric André Leon Talley, who has taken up tennis because Wintour thought him dangerously fat and, as he tells Cutler, ‘whatever Ms. Wintour says goes.’

Less flattering details emerge as well in the unspoken white-eyed terror of almost every one of Wintour’s subordinates, and a management style that makes harsh decisions about other people’s talents and then leaves the dirty work of articulating those career-breaking choices to seconds and thirds in command. Where Wintour is a passive aggressive minotaur who gores by stealth, Coddington is so alive to the beauty not only in models and jewelry but in everyday things that when she decides while up against a deadline to incorporate the documentary film crew into a photo spread and then turns it into a showpiece for her own whimsical energy, the act seems both delightfully unexpected and inevitable. The kicker speaks volumes: though overtly delighted with Coddington’s latest work, Wintour wants a camerman’s flabby stomach photoshopped into whippet thinness. Coddington goes around Wintour to keep things as they were, muttering, “Not everything has to be perfect. It’s enough the girls are perfect already.”

The most telling image of Wintour and Coddington’s unlikely partnership comes when they attend a fashion gala in Paris for the launch of the fall season. There sits Coddington, taking down furious notes on more outfits than she will possibly be able to find a home for even within Vogue ’s capricious largesse of pages, and there Wintour, swathed in fur like a tribal king, her oversized sunglasses perched on her face like a pair of shields. A Vogue photographer might capture the moment, and shove it into the magazine as frontpiece to an article called “Art and Commerce.”

If, as one of her employees says of Wintour, she is not just a high priestess of fashion but its pope, perhaps her most lasting achievement will not be the creation of the biggest edition of any magazine ever published, which the September 2007 issue chronicled here turned out to be, but her role as Julius II to Coddington’s Michelangelo—a sponsor and patron to a greater talent whose best efforts might just last. If so, it’s a legacy both Wintour and Coddington will have earned, page by page, ruffle by ruffle and wig by wig, and there’s cockeyed poetry in there somewhere that even a man who prefers reading B OXOFFICE or Field and Stream can somehow appreciate.