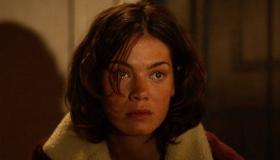 Trucker provides an impressive showcase for Michelle Monaghan ( Eagle Eye, Maid of Honor ). Her forceful performance as a determinedly independent truck driver proves that she can carry a film. Positive critical response to Monaghan could draw attention to this small-scale work.

Diane (Monaghan) is extremely capable at her job and frequently away from home on long hauls. She remains in control of her life, trying to avoid emotional complications and keeping to her habitual patterns. She is the dominant partner during a casual tryst, even paying for the room. Returning home after a job, she drinks the night away with a married friend, Runner (Nathan Fillion, Waitress ). She laughs at their drunken antics and is strong enough to drag Runner to his doorstep after he falls out of the truck in which they've been riding.

Returning home alone, she gets an unexpected surprise. Jenny (Joey Lauren Adams) wants to drop off Peter (Jimmy Bennett, young James Kirk in the recent Star Trek ), the 11 year old son Diane has not seen for ten years. Peter's father is in the hospital and Jenny, his companion, must leave home for a family emergency. The estranged mother and son are reluctant to be reunited. Peter is particularly hostile, referring to Diane as "bitch."

After realizing the boy's father, Len (Benjamin Bratt), is being treated for a serious illness, Diane agrees to keep Peter for three weeks. They are wary of each other. The hard edges to both characters keep the simple story from becoming overly sentimental.

Monaghan is excellent as the tough and feisty Diane who is forced to reassess the self-sufficient life she has built for herself. Peter disrupts her comfortable routine and refers to a work trip in her truck as "lonely and boring." Uncomfortable expressing emotions, Diane is most affectionate toward her son when he is asleep. A good cast backs Monaghan, particularly Bennett, who’s Peter keeps a built-in resentment for the disturbance in his own life.

Runner develops a rapport with Peter who is uneasy with his mother. In one of the film's best scenes, Peter continues to be afraid of Diane's pitches during a practice for little league. The boy is trying out since his father was a successful ball player.

Trucker is the directorial debut of James Mottern, the former producer of the Slamdance Film Festival. His film maintains the gritty realistic details of Diane's job and small town life. The familiar plot of a mother-son reunion is not up to the level of the central performance. For a boy who describes himself as having "no pals" and is so solitary, Peter adjusts a little too easily into his school and activities. Favorably, the screenplay, also written by Mottern, does avoid giving Diane a conventional love interest and a last-minute solution to solve any personal and financial problems.