close
Not Goldthwait’s Kane, but not too far from it either. 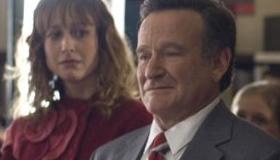 Former comic Bobcat Goldthwait’s unlikely evolution as an indie film auteur—three films in 18 years, including interlude stints directing three-camera television on The Man Show, Chappelle’s Show and Jimmy Kimmel Live —has, in many respects, been just as jittery and manic as his comic persona. What has remained consistent, however, is the emergence of a genuine voice which, though still uneven and somewhat jarring, has become more honed, polished and thoughtful over time. That’s not to say that his new film will necessarily find more of an audience than 2006’s Sleeping Dogs Lie, but a stalwart performance by Robin Williams should help secure a better than average arthouse draw into the fall.

Williams stars as Lance Clayton, a middle-aged high school teacher and single dad saddled with a teenage son—Kyle (Daryl Sabara)—who may as well have been spawned from hell. Rude, vile, cruel and abrasive to everyone he meets, but particularly toward his father, Kyle viciously exploits his father’s selfless love for a son he appears to know is a lost cause. Kyle’s only friend, Andrew (Evan Martin), is likewise belittled and berated, just as Kyle himself is shunned and belittled by others.

For Lance—a frustrated would-be novelist who yearns for recognition and acceptance from the outside world—Kyle is a handicap for which he has no reasonable recourse. Even his clandestine romance with another teacher (Alexie Gilmore)—the one bright spot in a life otherwise defined by failure and disappointment—is repeatedly retarded by the untoward antics and boorish behavior of his son. A tragic and unforeseen twist, however, turns their relationship on its ear, forever changing the ways in which both father and son are regarded by those around them.

Goldthwait was so fiercely maligned for 1991’s Shakes the Clown that he failed to make another film until Sleeping Dogs Lie, an exceedingly risky black comedy with enough seriousness around the edges to suggest that there just might be a real artist yearning to break out of the one-time Police Academy star. World’s Greatest Dad isn’t quite that breakthrough, but it is another major step in the right direction. Goldthwait’s ability to push buttons, not just for shock effect but to force his audience into the uncomfortable recesses of their own inhibitions, is undeniably acute. How he handles the resulting realizations is somewhat less certain. While Williams provides him a very capable leading man, more than able to convey the wealth of conflicting emotions necessary to make the film ring true, Goldthwait ultimately pulls his punches, leaning for safety on a story structure rather obviously borrowed from Tootsie (which itself borrowed from Some Like it Hot ) in order to give the picture a comfortable, if somewhat forced resolution.

Fans of edgy indie fare surely won’t be disappointed. Goldthwait has created something undeniably original, even appealing in a strange, off-putting way. His sense of style, in particular, has evolved with leaps and bounds since the days of Shakes. But it’s impossible to escape the feeling that this is not yet the work of a fully mature filmmaker. The push and pull of opposing influences, of diverse and even conflicting motives seemingly sired over the course of a performance career with more than a few bumps and detours of its own, are evident throughout, as if Goldthwait hasn’t quite managed to escape his own expectations of himself. Nevertheless, he presses on, doing so in an increasingly fascinating and engaging way with each successive film. Provided that audiences continue to support his efforts, a real breakthrough shouldn’t be that far off.