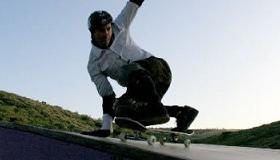 There is a sizeable portion of the populace (i.e. anyone eligible for Carousel from the film Logan’s Run ) who look down at the X Games as sort of the Jackass Olympics. To them (OK, fine, to me ), this annual Super Bowl of extreme sports is lucrative, high-octane revenge for thousands of kids named Dennis who were told by thousands of grumpy old men named Mr. Wilson to “stop skateboarding on my driveway!” The insanely dangerous stunts performed by these athletes will definitely impress fist-shaking oldsters (OK, fine, they impressed me ). The problem is that no one outside the primary demographic will ever see director Steve Lawrence’s double-barreled sales pitch for the X Games and the 3D technology that former Disney Chairman Jeffrey Katzenberg is betting his farm on. Firstly, it’s only being given a one-week theatrical run. Secondly, the film is long on death-defying stunts but light on human interest. Indeed, X Games 3D: The Movie is a less a documentary than a slick and average highlight reel that, nevertheless, should earn gnarly returns with young, male adrenaline junkies (and a smattering of old, male safety junkies).

Lawrence sticks mostly to a fairly simple structure. We meet an extreme sports superstar who delivers Sun Tzu-style platitudes about conquering fear and testing one’s limits. Then we see him at the Staples Center in Los Angeles, plying his gravity-ignoring trade at the 2008 X Games. The most famous X Gamers profiled (“profiled” being a rather generous assessment) are Olympic gold medal snowboarder Shaun White and 29-year old Moto X racer Ricky Carmichael (nicknamed GOAT, which stands for Greatest of all Time). Then there’s tattooed, 23 year old Kyle Loza, a freestyle Moto X racer seen practicing a self-created stunt called “Electric Death” by launching himself into a mountain of foam. This allows Lawrence to establish the difficulty of these stunts and how cringe-inducing it can be to watch participants wipe out, which begs the following point: there’s something wrong with any sport where fans enjoy seeing players get hurt. The X Games falls into this category (so does the MMA and, to a lesser extent, the NHL), as the disappointment of a failed jump runs neck-and-neck with the thrill of seeing body parts twist in unnatural and sometimes gruesome fashion. But there’s nothing more truthful than how an athlete reacts after having failed, which leads to the most interesting passage in the film (which is to say, a passage where the emphasis is not on achieving transcendent radness). Danny Way is a 35 year old skateboarding god who once jumped over the Great Wall of China on a broken ankle. As Lawrence shows in all its 3D glory, Way wipes out spectacularly on his 2nd jump of the 2008 Games. Despite fears of a broken everything, he exits the Staples Center infirmary and nails his next jump to the astonishment of the crowd. From there begins a duel for the 2008 crown, as Way trades jumps with friend, band mate and occasional competitor Bob Burnquist. When Way, post-competition and still running on a mix of adrenaline and terror, tells the crowd of his drive to compete despite the pain, we can only conclude that he and his ilk are wired differently from the rest of us. Like 25 year old Rally Car champion Travis Pastrana, who’s enjoyed 16 knee surgeries and countless concussions, money and fame aren’t the motivation. This is simply who they are. And there is a measure of respect to be granted for their ability to compete knowing the suffering that surely awaits them.

But Lawrence isn’t asking us to consider these deeper thoughts. He’s in it for the thrills, with no interest in the wives, children or friends who worry about the life these men have chosen. That’s why it’s almost jarring when Danny Way admits skateboarding helped him escape a “toxic” family life. It’s the only moment when the story is as 3D as the action. And since there really is very little story, the 3D is a parlor trick that becomes all-too necessary, as shiny distraction and, thinking long-term, as a gateway experience for younger moviegoers. But it’s admittedly groovy how 3D makes the athletes standing atop the Escherian skateboard ramps look like tiny action figures in a sea of rolling wooden platforms. Everything looks plastic, Lilliputian and it throws you off in a pleasing, spaced-out way. The film contains over 90% native 3D content. Ten 3D rigs were used, some mounted onto Polecams and Steadicams. When visiting an athlete’s home, complete with elaborate backyard skate ramp or dirt track, Lawrence conveys the man-versus-himself motif in simple, well-composed lockdown shots. What’s less well-composed is the over-the-top script read by the actor Emile Hirsch ( Into the Wild ), which strains to sell extreme sports as gladiatorial combat of the mind, inner struggles that would consume mortal men. It’s flowery and pretty silly. And if someone can find meaning in the line, “the present is the past and only the future has currency,” please leave a comment below.

By the end of this extreme sports infomercial, one can imagine hordes of orthopedic surgeons and physical therapists wringing their hands at the thought of pre-teens skateboarding down the cement stairs of their elementary school (kids, don’t try this at hometry it at school instead). Sure, the film may gloss over what it really takes to reach the pinnacle of these horrifically dangerous activities, but no one expects messy reality to intrude onto something meant to induce hero worship and spur interest in the X Games.