on September 12, 2009 by Barbara Goslawski
Print 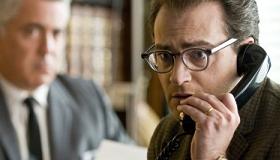 With a cast of relative unknowns and a modest budget, the Coen brothers create yet another comedy classic with their latest send up, A Serious Man. No one does black comedy quite like the Coens, especially when they work in familiar territory. Given enough creative space to play, the pair makes fast work of humanity’s foibles. In a 1960’s Midwestern suburb, the pair turn one man’s quest for the meaning of life into an absurdist existential prank. Their previous films ( No Country for Old Men and Burn After Reading ) garnered the attention and the Oscars needed to ensure a strong fan base, even to support box office success for a smaller production/release. A Serious Man will be a modest success commercially, with a strong base in residuals.

The smaller scale of the production and the filmmakers’ more personal experience with the subject might be the secret to A Serious Man ’s success. There’s more than a hint of biography in this film, set in Minnesota in the 1960’s. The film recalls Fargo (1996) in era and tone. In this period piece of sorts, the brothers gleefully lampoon the changing mores of Middle American society at that time. It’s 1967, a turning point in society. Residual yet prevailing moral and family values jostle with the ever-growing counterculture.

And just to make things more chaotic, the brothers throw religion into the mix; Orthodox Judaism, with a healthy dash of folklore. An ancient curse sets the tone for an investigation into how bad things happen to good people. Larry Gopnik (Michael Stuhlbarg) is a practising Jew with a solid job and an average family. He’s a putz of sorts, though: his kids walk all over him, his wife openly cheats on him but all he can do is helplessly observe. Unable to act, he can only think—and over think—and then turn to his faith to enable him to think even more. In a stroke of comic genius, the Coens lead Larry through a comedy of errors as he struggles to reach the one rabbi who he believes knows the secret. The religious quest he undertakes and the conclusions it reaches are hilarious to say the least.

The film employs an illusory quality from the start. An old fable introduces the story and continues to resonate throughout the film. Its influence is subtle but pervasive. The film itself becomes a fable and the action, threatening to constantly veer into parody and caricature, is tempered in its very pitch and by the resultant unrealistic tone. As the story unravels, this ancient influence reigns in the increasing disorder. Every detail, every twist, every filmic device is employed by the Coen brothers in the service of subverting any notions of realism.

Call it cynical, but the story’s conclusion is both artful and astute. After so many twists and turns (and laughs—this movie is laugh out loud funny), one could argue that the film ends with a whimper. Not so, I maintain. The comedic nature of Larry’s religious quest validates the ending because it recalls an earlier era. This story could not exist in the present, but its message can. It’s not a grand statement but it rings true.