close
Thematically sound if not all that funny 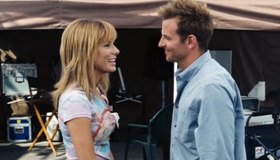 All About Steve is far better than would be expected from a title long buried by Fox. Supported by a more than competent cast and full of solid and unpredictable verbal jokes, this comedy about a temporarily insane cruciverbalist (crossword puzzle writer) who falls for a news cameraman is more a personal journey than it is a romance, which may account for the film’s meek promotion and long shelving. Without stronger advertising it’s hard to expect good numbers even though the cast, head by Sandra Bullock ( The Promotion ) and the increasingly popular Bradley Cooper ( The Hangover ), is pretty great across the board.

Mary Magdalene Horowitz (Bullock) makes a living (sort of) building crossword puzzles, which essentially means she’s become fantastically adept at cramming ideas into empty spaces. Paradoxically enough, Mary herself can’t seem to fit anywhere. She annoys those around her by spouting trivial facts non-stop (partially because she has nothing else to discuss) and, when the entire of her colleagues and family tirelessly direct her towards building a social life, she meets a cute guy and decides he’s totally The One (i.e. she crams this disinterested guy into that empty space). He of course thinks she’s a loon, and for the time being she fits that bill. Hand it to Sandra Bullock that a girl dressed like a half-blind, Jet-Rag reject appears totally sane, even though she knows far too much about cicadas and falls madly and stupidly in love with a guy everyone can see is a jerk. Clearly a girl given to working for her goals, Mary writes a fantastically romantic crossword entitled “All About Steve” and gets fired for it. She takes this newly earned free time as a sign and follows her dreamy cameraman on the road. He doesn’t at all want her there but nonetheless her intellect, observation and quickness create some formidable opportunities for him. So, while Steve finds ways to ditch her, his colleagues leave her clues so that she might follow. When she’s finally found him after a media blitz, a tornado, a whirlwind of bugs and a demolished Gremlin, she falls down a mineshaft, thus making the cameraman the story. The best thing that happens is Mary makes friends. They’re preposterous friends but they’re sweet and they fit in exactly the sort of awkward yet crucial way unorthodox people do.

The film’s humor skews towards the cruel, but not in any bracing way—it’s hard to even call it mean-spirited, as all the jokes are germane to a certain kind of “I’m ok, you’re ok, but sometimes we act like jerks” mentality. The absurdity of news, particularly cable news, is a fixture here. The narcissistic anchor (Thomas Haden Church) gallops from oddball drama to oddball drama prizing his hair and his histrionics over the stories he’s meant to report. At one point he demonstrates his dim-witted arrogance by yelling, “I’m incapable of telling anything but Truth.” As proof everyone’s in on the mania, this proclamation is one-upped by his biggest competitor, a news anchor whose last words (said during a Butch Cassidy and the Sundance Kid style freeze frame) is “I am The News.” This isn’t the film’s only vintage movie reference: the title points to All About Eve and the sketchy news content and abandoned mineshafts towards Ace in the Hole. It’s a shame that this is as far as those references go—neither insight, nor any bigger purpose is ascribed. But using members of the press (cruciverbalists, in fact, count as press) to demonstrate the division between what we say and what we do (Steve at one point says, “I’m a guy. We say things we don’t mean.”), is not without its merits, just as this film is not without its good bits. Even if you have to watch some supposedly nice guys be mean to get to them.