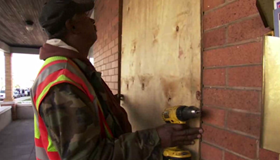 The sleuths behind American Casino present a truckload of perspectives and evidence to incriminate the main suspects that drove the country into yet another economic bubble burst. The film takes swings at what led to the subprime mortgage crisis. The premise here takes a forensic look at the handiwork of exploitative lenders and reckless investment bankers who ripped off and indirectly booted countless many from their homes because they took advantage of an anemic system of checks and balances. The film exposes the taken and the takers. But it’s the Main Street losers not the Masters of the Universe that finally get their due. Investment banks should offer cash to audiences as a minor act of restitution. Still, the turnout in theaters will be moderate. Expect heavy DVD/BluRay viewers and academic institutions to buy into this articulate, straight-shooting doc.

Immediately, the betrayal of trust tale unfolds. Who caused this mortgage meltdown? Clearly, it's not only jumbo loan shop Countrywide but also Deutsch Bank, Wells Fargo, Goldman Sachs and so on. Many scandalous transactions were made by these heavyweights who were building a house of cards, hoping to retire before the jig was up. The film parses through the rhetoric and finds stories well beyond Wall Street; mortgage swindling in Baltimore, Maryland stings just as badly in Stockton, California. Casino relies on interviews with former higher-ups in the private and public sectors, a savvy business journalist, a deep-throated banker at Bear Stearns, numerous homeless or borderline homeless sorts, professors, civil rights lawyers, pest control specialists and even the man who bet against Wall Street's expectations that the boom would keep going. He's now $500 million dollars richer.

American Casino ’s main thesis is that the mortgage loan biz and its antiquated models were completely insecure and rife with eviction and bankruptcy consequences. Refinancing your house or trying to buy one without the capital or the salary to pay for it was the same as betting the ranch and college fund at a high-stakes poker game. The faces of despair are front and center: the schoolteacher in Baltimore filing for bankruptcy or the reverend who lost her childhood home because she refinanced now sleeps in a car between giving sermons. The majority of the victims interviewed are black. The figures further imply predatory lending practices by institutions were racially motivated. And while Black America may be taking it on the chin the most, a drive along one suburban road in Stockton, California discovers that all but three homes are defaulted or foreclosed on, having been confiscated by the banks. A mass exodus has resulted leaving empty houses in disrepair. One sector has filled the void and that's pest control. Lots of houses have pools that, now deserted, have become mosquito breeding grounds.

For their part, the filmmakers put many white collared workers on the hot seat. Several admitted being party to the scheme that took the country and the world for rivers of cash—and disclose details on their role and why this happened. The regulators didn’t show much teeth and the rating mechanisms installed were handled like backburner priorities. The Bloomberg reporter fishes out the stinky numbers. While staring at his computer monitor you see how the breakdown of data proves that most of the people approved for loans couldn’t get approved for a storage shed let alone a brownstone. One mortgage broker admitted they were selling snake oil. She along with her money-hungry bank lenders were selling first time homeownership, which is akin “to making dreams come true,” she said. In reality the banks “were making a killing.” Meanwhile Treasury Secretary Henry Paulson doing damage control in D.C. says the handout is “all about the taxpayer” and “that’s all we care about.” And though he denied the filmmakers an interview, former Chairman of the Federal Reserve and financial messiah Alan Greenspan admits his ideology was “flawed.” But under Greenspan’s watch the house (in this case corporate America) was on a gluttonous path and the chips, the bricks and everything in-between fell, and fell hard.

The documentary's musical score, fit with Moby instrumental tracks and local rappers, helps drive home a dramatic tone. You can’t sit and watch this pretty drama unfold and feel comfortable. It's not just a bunch of near-sighted people who were shooting for the moon. The victims are responsible, educated people who may not be swimming in green but were conscientious despite eventually getting duped. There’s a brigade trying to reverse the devastation and these good Samaritans’ takes are logged. Not trying to push one perspective too hard, the film scales an objective tightrope.

As remedial as the film tries to be, the calculus is still tough to get around. But there’s a clear and distinct bet made by the banks that went bust. And they, along with the brokers and the middlemen, received golden parachutes. Most of these bloodsuckers continue to stay open while so many millions are cramming shelters for the first time in their lives, killing for crumbs. Call it the thumb on the scale or reverse red-lining—it’s all just malfeasance run amok without oversight by greed-is-good types treating nest eggs like dice on a craps table. The piece finds a balance between the tearjerkers caught in the crossfire and the reckless bidders who don't seem to feel troubled for the life of excess at the expense of others. While anyone can shirk the law and get away with it—you have to ask what has become of a society when want trumps right?