close
Salt (and poetry) of the earth 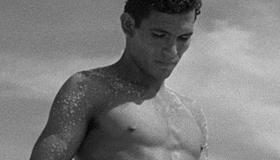 A French and Venezuelan co-production originally released in 1959, Margot Benacerraf’s Araya is a poetic, deeply meditative and engrossing ethnographic film about a prolific salt marsh and the people who mine it. Her aesthetic recalls Maya Deren’s Ritual in Transfigured Time, but features a subject that nods to Robert Flaherty’s Man of Aran. Equally ancient and perpetual, Araya’s peninsula and its inhabitants work the sea for salt and fish, and a gentle and earth worshipping non-narrative arises from the rituals of their days and nights of constant labor. The pleasures are few and the toiling constant, but, as the film implies (with bombastic explosions), industry will come to this town and a new existence is on the horizon. Numbers will be small and the bulk of the film’s profit should find a source in the educational market, but those who see it will be entranced.

Benacerraf paints the portrait of an arid and desolate land whose greatest export is salt, an asset the omniscient, Spanish speaking Voice of God narrator (José Ignacio Cabrujas) tells us used to be as precious as gold. When Conquistadores discovered the salt flat, it was revered and organized and, ultimately, exploited. A fortress was built to oversee the workers and designate the land as Spanish territory, but since then the fortress has been eroded by time and salt air and the inhabitants can only look upon its ruins as they would so many fossils. The independence of the region and people is not addressed but their isolation from urban areas and the work they do with little oversight suggests a Post-Colonial condition. Benacerraf emphasizes the work of these bodies, their families all contribute and we’re told a 9 year old in the family washes salt all day long: “This will be his only memory of Childhood,” the narrator tells us. Both sad and poignant, an admiration for the work and respect for the people’s lack of comfort come through—as does the parallel of their work to the constant work of the elements: the wind, the sun, the water and, in once scene with a potter, the fire.

After fire, a force both destructive and lyrical, the natural order and audio of the film is invaded by the sound of industry. A bulldozer breaks a hill, a salt harvester plows through the flats. On the one hand this looks like the end of the people’s tireless labor but isn’t it also the end of a livelihood half a century old? It’s hard to say, because the film treats the intrusion with neutrality. A neutrality that’s reasonable but carries with it a gentle belief in the advancement provided by machinery.

Like most ethnographic film of the time, Araya projects the tang of the “noble savage” on its unspeaking protagonists. They’re given names but few have voices and their voices are somehow irrelevant. Theirs are lives of action. Laudable, the position the camera and the narrator take is respectful but still detached in that antiquated, Colonial way. In that, the film is not just an artifact of a pre-industrialized culture infiltrated by modern equipment, it’s an artifact of perspective and form. We simply can’t make pictures like this anymore; our modern politics don’t permit it and the cultures we could pinpoint are too long infiltrated by the outside world to make case of them. But what a lesson this teaches. Bodies, according to the poetics of Araya, function with the rigor, ardor and rhythm of the tides and winds: my, what comfort has cost us.