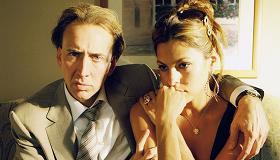 The offbeat combo of director Werner Herzog and star Nicolas Cage (unleashed in one of his best performances), should make for potent box office in this story of a drug addicted, anything-goes cop who gets wrapped up in a case involving Senegalese illegals and an underground drug murder. This commercially potent movie is getting exposed using the same strategy typical for a fledgling prestige piece; it’s following the fall festival routes with stops in Venice, Telluride and Toronto. But good reaction may mean some of the major distributors who all turned this down may be rethinking that decision. Currently scheduled to open in limited release in NY and LA on November 23rd, prospects for going much wider are looking good.

Cage plays a dedicated lieutenant whose severe back problems have lead to a prescription pill addiction—and more. Pulling over unsuspecting night club patrons, demanding their drugs and snorting coke while having sex with their girlfriends as they watch is just ONE of the unorthodox methods this man uses. He makes Dirty Harry look like Shirley Temple. His relationship with a prostitute (Eva Mendes) doesn’t help as Cage plays a guy beset by his own demons and deteriorating physical condition due to what could charitably be called an unhealthy lifestyle. Still, he is determined to break the case at any cost. Along the way, Herzog and screenwriter William Finklestein throw in some bizarre and uproariously funny bits including a couple of crooning Iguanas, some roadside alligators and a very big dog he gets saddled with at one point. There is also a go-for-broke encounter at a pharmacy and another with an old woman dependent on an oxygen tank to live. That scene is an instant classic, one that recalls Richard Widmark’s famous stairs sequence in Kiss Of Death.

The post-Katrina New Orleans setting is perfect; it suggests a society gone awry where the line dividing the good and bad guys is increasingly gray. Although Herzog and Cage deny much similarity to the original 1992 Bad Lieutenant, directed by Abel Ferrara and starring Harvey Keitel, they do have a couple of minor things in common. Generally, this is a complete original and far less cerebral than the earlier film.

In some ways recalling his work in his Oscar-winning Leaving Las Vegas, Cage is still dealing with a whole different set of addictions this time and the results are wild and woolly. The actor is all over the screen throwing everything he knows at the wall and shooting for the moon. It’s a mesmerizing, riveting and bravura piece of acting. Some might say its over-the-top but that’s precisely the point, I would guess. Cage is fearless and on fire here. It’s quite a show and lots of fun to watch.


Mendes makes a strong impression while Val Kilmer, as Cage’s partner, does not have a whole lot to do. Rapper Alvin “Xzibit” Joiner is quite effective as a drug lord Cage’s character seems to bond with. Jennifer Coolidge also stands out in a couple of choice scenes.

Bad Lieutenant: Port Of Call New Orleans is a vividly acted and directed movie that stretches the boundaries of its genre and keeps you in its ever-unpredictable grip throughout.