close
My Negligible Night With Stanley, Patricia and Theo 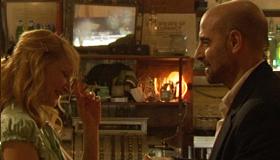 Stanley Tucci’s remake of the 1996 film by the late Theo Van Gogh is one of those failed experiments that elicit forced laughter from fellow screening-room vultures eager to show they get it. That reaction is prompted by good will toward the Dutch filmmaker, actor/director Tucci and his co-star Patricia Clarkson and by respect for their bravery. Yet it doesn’t change the fact that this rondo about an estranged married couple who engage in elaborate role-playing to cope with a loss is merely a depressing curiosity. Blind Date will attract loyalists to the one Gotham theater where it’s unspooling; word of mouth from those who stand by their positive response won’t move the revenue needle however.

Blind Date is the second of three films by Van Gogh (murdered in 2004 by an Islamic fundamentalist) being remade by American actors. The first was Steve Buscemi’s Interview and O6 is slated to follow. A big strike against the movie is that it’s not very well made, even taking into account budgetary constraints. Shot over the course of seven days in Ghent, Belgium, it looks as though it was filmed in one hectic night. Many members of Van Gogh’s crew were hired and they employ his signature three-camera system, which may or may not explain the poor lighting and the lensing’s inconsistent focus.

It takes place in a shabby boîte in an unnamed city (meant to be American though clearly not). A little girl narrates, introducing the audience to her parents and their eccentric behavior. As she describes how Don (Tucci) and Janna (Clarkson) place personal ads in newspapers and then answer them pretending to be strangers, it soon becomes apparent she’s no longer amongst the living. Each segment or faux blind date is introduced by a shot of the newspaper ad in question. Don is a magician and presumably the proprietor of the establishment, where he performs intentionally bad magic shows. Indeed, a number of the film’s alienating features are purposeful, such as the screeching violin music that accompanies one of his performances at the beginning of the movie. According to his daughter, Don’s aim was to be good at not being good. He succeeds all too well.

Janna is searching for a dancing partner on one of their “dates.” In others, Don seeks an “aggressive woman,” he’s a blind man looking for a “sighted mate” and, in the touchiest, advertises for “young woman to be his daughter.” Their improvised repartee includes dialogue such as “I slept with my mother I sodomized her.” At one point, Don breaks character and criticizes their performances: “This is artless shit.” Touché! Eventually they repair to an adjoining ballroom and ride in a bumper car on the dance floor. It’s a relief to be out of the other space, but the interchange is still banal. On occasion, they involve other people in their games. Most notably, a waiter played by Dutch film star Thijs Römer (in his first English-language role) who lurks about and is used to incite jealousy.

Clarkson has never looked better. She’s in both her physical and acting prime and without the substantial skills she and Tucci bring to Blind Date, I shudder to think how this high-wire act would fare. The idea is to be sad-funny, arch and absurdist on the way toward evoking a detached poignancy. The actors are far more successful than the material. Who’s to criticize what people do to get through bad times or save a marriage? Such games are as good a means as any. But the catharsis is completely one-sided. Its therapeutic utility can be debated, its cinematic merits not so much.