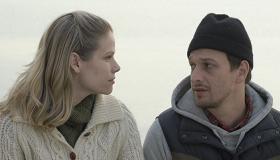 Brief Interviews With Hideous Men is a noble failure of a film that’s worth a lot more than many of the safer if more achieved works premiering beside it at Sundance 2009. Based on the novel by the recently suicided writer David Foster Wallace, the film has been constructed as a kind of jazz fugue on masculinity by screenwriter and first time director (and The Office series regular) John Krasinski, who takes daring but only intermittently successful visual risks in how he stages and edits the disjointed scenes, faux interview segments and flashback dramatizations that comprise this work. With its relentless emphasis on the deviousness and unreliability of the male gender, Brief Interviews is like a bitter woman’s magazine article come to life—call it “Why All Men are Cheaters, and Why They Can’t Commit.” But that description makes this dense 72 minute film sound a lot more accessible and commercial than it actually is, and while Krasinski definitely emerges as a talent to watch, it’s hard to imagine audiences masochistic enough to want to transform this movie into anything more than marginal arthouse fodder, or, more likely, a Sundance Channel exclusive cablecast and indie DVD.

Brief Interviews ’ nonlinear plot is framed as a series of interviews conducted as research by college professor Sara Quinn (Julianne Nicholson), a woman conducting unorthodox research into the traumatic effects of the feminist movement on the male gender. Having recently suffered a traumatic relationship breakup of her own, Professor Quinn may be exploring the topic for internal reasons that are never expressed—the character is such a cipher, a listener only, that it’s difficult to say. But the men she selects, who come from all walks of life and are of various races, are almost uniformly horrors—monsters of narcissism and betrayal—and the interweaving of their self-absorbed, me-centered justifications for their misogynistic behavior toward the women who love them wears very, very thin overtime.

It doesn’t help that Krasinski has failed to alter Wallace’s luminous text so that it fits comfortably in most of the actors’ mouths, or that Wallace’s ear for the dialect of the blue collar and Sammy Glick types who comprise most of Quinn’s interview subjects was such a hollow one. Some of the subjects in this gender-based Milligram experiment are unique and believable; others are two-dimensional archetypes; others (especially any character depicted as being below a certain level of education and income) are flat stereotypes that speak for the author’s contempt of people less elite and intelligent than he. Everybody speaks in undigested short-story prose sentences though, and while it’s possible for a truly great actor to make this riveting (as Frank Faison does in the one dramatization that has nothing to do with gender politics, and which is ironically the high point of the film), Krasinski does himself no favors by appearing in his movie to deliver an enormous climactic monologue full of words he sounds like he had to look up to pronounce.

There was clearly something broken in David Foster Wallace, and it may be that whatever hatred of self drove him to despair is reflected in the vision of men he created, and which Krasinski has replicated. It’s still amazing that the principle creators of this very short movie were both men though, for the views it espouses are so relentlessly and misanthropically and monochromatically filled with spite and bitterness that Brief Interviews makes Neil LaBute’s In the Company of Men seem like a delicate love-conquers-all dramedy by comparison. In a sense, the title is misleading given the world Krasinski has chosen to create, for all men are hideous in this movie—not a subset of the gender but its totality. But Krasinski is young, ambitious and overt, with laudable pretensions to a more literate cinema, and his visual daring and the structural sophistication of his editing is a marvel that keeps bringing the viewer back every time Brief Interviews threatens to go completely off track. Aside from the depressing celebrity pedigree, his is exactly the kind of movie Sundance pretends to venerate. It belonged at the 2009 festival, and Krasinski belongs in the director’s chair for another, equally ambitious and better movie to come.