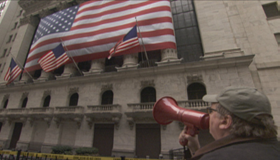 With his trusty bullhorn and razor sharp comic skills at hand, Michael Moore stays true to formula and provides a funny economics lesson covering the recent Wall Street bailout, ongoing foreclosure crisis and the overall decline of American industry. Moore does not reveal anything new in Capitalism: A Love Story and at times the sprawling film is too solemn. But thanks to some amazing stories of economic survival and Moore's much-needed clowning, Capitalism: A Love Story will deliver sizable audiences as the first documentary release for Overture Films and easily become the year's top-earning doc.

Tackling a vague subject for a mainstream documentary (the origins of American capitalism and its role in today's economic recession), Moore travels the country interviewing a wide cross section of people, from Chicago factory workers on a sit-down strike to a Miami family trying to return to their foreclosed home. Like a Whitman's Sampler of chocolates, some stories are better than others. For example, a segment with actor Wallace Shawn giving his take on capitalism makes no sense at all. Thankfully, just when Capitalism begins to sputter, Moore zips off to a more engaging story, a more camera-friendly face and puts his movie back on track.

Moore is livelier than many of his subjects but that's a saving grace of the two-hour-plus film. A better comic than economics professor, Moore does a good job of putting himself front and center when talk about derivatives and dead peasant insurance policies drains the funny from the film.

Editors John Walter and Conor O'Neill, working with five co-editors and two archival producers, keep the archival footage lively and the stories moving quickly. Camerawork from Daniel Marracino and Jayme Roy bring an epic luster to Capitalism ; making it a movie as big as the Falstaff-like Moore.

Capitalism is not Moore's best film. That award belongs to the rollicking Bowling for Columbine. Nor will it become the cultural phenomenon of Fahrenheit 9/11, well, because the murky topic of capitalism is just not as newsworthy as the Iraq War.

But Moore remains one of only a handful of filmmakers who are true celebrities. More importantly, he fills Capitalism with a number of punchy comic gags perfect for cable news networks and morning talk shows whether conservative or liberal. Capitalism, especially in light of recent stock market gains, may not be as newsworthy as originally planned, but Moore remains as newsworthy as ever.

Moore also practices one of the longstanding rules of comedy—leave the audience wanting more—by saving his best gag for the film's final scene. Using yellow police crime scene tape he surrounds the Wall Street headquarters of various financial firms with a gusto that would impress the environmental artists Christo and Jeanne-Claude.

It's also proof of Moore's showmanship, a talent he continues to mine with every new film.