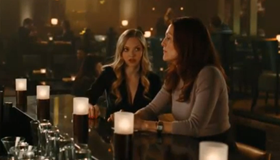 Chloe has a great director in Atom Egoyan; a wonderful cast in Julianne Moore, Amanda Seyfried, Liam Neeson and Max Thierot; and it was penned by Erin Cressida Wilson, the Independent Spirit Award-winning screenwriter of Secretary. Yet, this English-language reimagining of Anne Fontaine's 2002 French drama Nathalie about an upper middle-class woman who suspects her husband of cheating and hires a hooker to prove it fails to completely satisfy, thanks to problems with the script that neither director nor stars can overcome. Despite that, this handsome production, which had its world premiere at the Toronto International Film Festival, with the right distributor and the right marketing campaign aimed at mature, melodrama fans, could score healthy returns at the box office.

Ob-gyn Catherine (Moore) is convinced something is up with husband David (Neeson) after he misses his birthday party and she intercepts a provocative message from one of his students. Instead of confronting him, she hires Chloe (Seyfried), a call girl she meets in a restaurant washroom. The young woman is to make contact and report back the details if David should take the bait. Soon, Chloe and Catherine are conferring on a regular basis, Chloe shocking and titillating her with the details of her encounters with David.

The biggest problem with Chloe is that scriptwriter Wilson cannot seem to decide which model of melodrama to follow, the elegant soap opera of Douglas Sirk or the over-the-top grotesquerie of Robert Aldrich at his most What Ever Happened to Baby Jane? extreme. Catherine is so repressed that she keeps her husband at arm's length and, though sex is her business, is upset that her teenage son Michael (Thierot) is sleeping with his girlfriend. She is so brittle and rigid that she seems close to breaking. At the opposite end is Chloe. As the relationship between the women grows heated, she becomes ever more emotional and volatile. But while Egoyan establishes an increasingly erotic atmosphere, the mood is too often deflated by ridiculous dialogue.

For Moore, a marriage on the brink is familiar territory. Catherine is a role she could no doubt sleepwalk through, but to her credit she does not, allowing the audience to feel this woman's pain as she confronts aging and her fears of losing her husband. Her scenes with the equally fine Neeson hum with anxiety, regret and things left unsaid. The drama would have a better balance if his role were larger, particularly because the chemistry between him and Moore is such that they are completely believable as a long-married couple. A bigger part for him would also have allowed more insight into Catherine's motivations for first engaging Chloe and then growing closer and closer to her even as it becomes more and more obvious that the girl isn't exactly stable.

Seyfried also deserves credit for breathing life into a character whose behavior is sometimes so extreme that it could easily have fallen into caricature. All three central performances are among what is right with Chloe. It is just too bad they are not supported by a better script.