close
A delicious treat for the entire family

Cloudy with a Chance of Meatballs 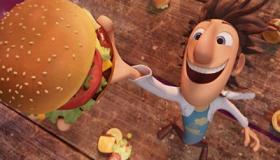 It’s raining big food and big laughs in Cloudy with a Chance of Meatballs, a hysterically funny and wildly clever new ‘toon that could just turn out to be the most purely entertaining and inventive animated comedy of the year. This smart adaptation of the highly successful 1978 children’s book about a scientist whose latest machine turns water into food, wreaking havoc on a small town, is expertly written and directed by the team of Phil Lord and Christopher Miller. Sony’s box office prospects should be yummy, DVD sales delicious and, with a little luck, awards attention should be sunny with a chance of Oscar nominations.

Starting with the book’s basic premise, Lord and Miller have expanded the possibilities and milked every possible food-related joke (and there are plenty). Story is centered around Flint Lockwood (voiced by Bill Hader), a wannabe inventor whose strange gadgets, like a monkey thought translator, are not exactly consumer friendly items. Suddenly he comes up with a contraption that turns water into food and immediately causes complete chaos and destruction with it. Out of this, however, cheeseburgers start raining from the sky and he becomes a sensation on the Weather News Network, whose rookie female reporter, Sam Sparks (Anna Faris), reports ecstatically, “You’ve seen a meteor shower, but you’ve never seen a shower meatier than this!” But as the greed factor takes over and as the townspeople want more food in bigger portions, the machine careens out of control, delivering everything from Spaghetti Twisters and imposing meatballs to every other imaginable food group. As the entire western hemisphere starts to turn into “one big pot luck,” Flint and Sam work together to reverse the catastrophe.

Using digital 3D to enhance the sprightly visual effects, Meatballs succeeds with sharp direction and lots of wit making it not only a kiddie delight but one their parents will probably love too. The film only disappoints toward the end when it falls prey to a typically over-cooked and much too frenetic action sequence that lacks the discipline and satirical edge the rest of the movie enjoys. For the most part, Lord and Miller know exactly what they’re doing and get tons of mileage out of book author Judi Barrett’s nifty premise.

The voice cast is well chosen, with Hader and Faris ably handling the character work and emerging as likeable, but flawed central figures. James Caan is perfect and quite funny as Flint’s technology-challenged dad. Neil Patrick Harris is a riot voicing Steve The Monkey, Flint’s “Hungry! Hungry! Hungry!” best friend. Bruce Campbell plays the gluttonous town mayor, Chewandswallow, for all he’s worth, while Andy Samberg has lots of fun as “Baby” Brent, the “biggest celebrity” in town. One surprising but inspired bit of casting finds The A Team ’s Mr. T as a by-the-book cop who tries to keep everything under control. Even The Today Show ’s Al Roker turns up in a cameo as the anchor for the Weather News Channel.

In a banner year for creative ‘toons, Sony Pictures Animation, which turned out the wonderful Surf’s Up a couple of years ago, has done it again and should easily fill the usual Fall family film void with a nice-portioned hit from this fun dish.