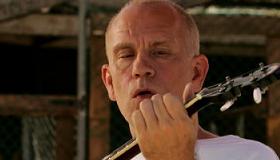 Beneath a veneer of collegiate erudition, David Lurie (Malkovich), a professor of romantic poetry at the University of Cape Town, is anything but poetic or romantic. Coarse, cold, arrogant and self-loathing, he’s a human disaster yearning to happen—if only to add some color and excitement to a mundane, carefully controlled urban existence. His seemingly premeditated seduction of a young, mixed-race student proves the match that lights the proverbial fuse, the entire affair eventually blowing up in very public fashion. Knowing full well that it will mean the end of his career, Lurie pleads guilty to all trespasses, offering no justification for his actions. Disgraced and at risk of destitution, he relocates to the remote, rural farm of his estranged daughter, Lucy (Jessica Haines), seemingly to seek reconciliation as a prelude to hoped-for redemption. But new and even more foreboding challenges soon present themselves in this markedly less hospitable environment, forcing Lurie to exercise elements of his character that reveal him—both to himself and the audience—as far more complex and unpredictable than anyone could have imagined.

Despite the South African background and setting, Disgrace is an unmistakably Australian film. Following the novel’s publication, Coetzee immigrated to Australia where he would subsequently become more an Australian icon than a South African one. No surprise, then, that his literary voice should meld so seamlessly with the kind of blunt and unsentimental truth-telling that has defined Australia’s unique brand of poetic realism since it first emerged during the Australian New Wave of the ’70s and ’80s. While neither Jacobs nor his wife, screenwriter Anna-Maria Monticelli, are necessarily New Wave figures, both came of age during the era and, like fellow Aussie Ray Lawrence ( Jindabyne ), remain firmly entrenched in its stylistic and thematic conceits.

Disgrace, the film, tries less to present a cinematic interpretation of a notoriously dense and obtuse book than a psychological riddle that compels the audience to wrestle with the same questions as its lead character. Monticelli’s screenplay is intentionally sparse and, at times, cryptic—as if simultaneously teasing and coaxing the audience with a series of inconceivable moral riddles. Jacobs, likewise, stages even the most incendiary scenes without betraying so much as a hint of moral judgment against Lurie. Whether audiences ultimately choose to love him, hate him or settle somewhere in-between seems to matter far less to Jacobs and Monticelli than shedding a light on the nagging vagaries of the human condition. That’s certainly a tall order for any actor—particularly one like Malkovich who, despite his considerable talents, hasn’t ever really been able to don an accent that didn’t sound like some variation of “British”—but lacking in polish is part of who Lurie is, and Malkovich’s relatively easy adoption of his disheveled psychology proves the glue that quite literally holds together what could have become, in lesser hands, a pretentious and pointless bore.

Nevertheless, there are those who have fiercely critiqued Australian films of this sort for a certain austerity of characterization. But the questions raised are too broad and too philosophically weighty to be quite so easily dismissed. That in itself makes Disgrace well worth seeing, perhaps more than once, and certainly worth debating and discussing well after the fact.

As to Jacobs and Monticelli, whose previous picture, 2000’s La Spagnola, was a phenomenon mainly limited to Australia and some select festivals, Disgrace represents a noteworthy coming of age moment for a talented power couple whose day has been many years in the making.