close
This time, the little guy’s the boss 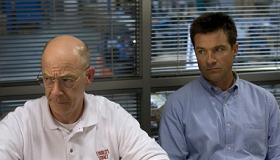 A new workplace comedy from the man who made the workplace comedy of the last decade, Extract looks at the business hierarchy from the top down. Where writer/director Mike Judge’s cult classic Office Space focused on corporate anonymity and malaise, Extract looks at class struggle, specifically highlighting the troubles of a small business owner, his ungrateful (if well kept) employees and the toll success has taken on his homelife. Like Office Space, the film renders potentially melodramatic people and circumstances with an even temper and tone, so the humor stays dry—and, truthfully, pretty tame. This approach is a big part of why Office Space became the surprise, beloved, sleeper darling it did: it handled mediocrity with appropriately mediocre terms. Judging by that standard, we might expect theatrical sales to be low (as they have been for Judge’s past endeavors), but the numbers will soar once the title hits DVD and TV.

Jason Bateman is reliably great as Joel, the dedicated owner of a small business that makes extracts. Rumor has it the company may be bought out. This means a possible early retirement for Joel, who has done very well with the business though it, and pretty much everything else in life, leaves him unsatisfied. Just when the buyout seems real, a lazy and entitled employee sets off an industrial accident that emasculates a floor manager. The wounded employee, Step (Clifton Collins Jr.), has no interest in taking legal action until a beautiful conniver named Cindy (Mila Kunis) enters the property and arouses everyone’s worst instincts. Meanwhile, Joel feels his marriage is losing its spark and friend Dean (Ben Affleck) wants to help, but is only useful in procuring drugs and prostitutes, which are more of a complication than a stress relief. Cindy’s the sort of hot mess/femme fatale that brings all the men in her radius to their knees, and now that Joel is in her orbit, she can show him exactly how she extracts from others the things she wants, and that’s something this extract man hasn’t been able to figure out on his own.

In many ways, it’s Judge’s matter-of-fact approach that cements the film’s successful moments. He’s terribly good at reducing everyone and everything to chess pieces on a board—but that reduction isn't cold-hearted or dehumanizing, just neutral in a context where such perspectives on people and labor are typical. This bodes well for wry smiles, but doesn’t actually produce big laughs. Bateman, assuming something very like his persona in the now defunct and utterly brilliant TV show Arrested Development, plays very well with the other A-listers and Kristen Wiig (slightly underused as his wife) gets to show a different side of her comedic range.

It’s a strange curse that Judge’s past endeavors have never been that theatrically successful; they’ve always reached their heftiest fanbase in ancillaries. Even (my personal favorite) Idiocracy was buried by Fox but earned a potent cultural role through heavy rotation TV and DVD sales. You can buy the film’s water substitute, Brawndo The Thirst Mutilator, online—no joke—and I hear it tastes god-awful. If the odd extracts discussed by Joel in the film will pop up as kitschy gag items online is a question for the future, but whether or not this averagely entertaining workplace comedy will find itself loved violently by admirers is certain: some auds will think this one is the living end.