close
A comedy in zombie's clothing

George A. Romero's Survival of the Dead 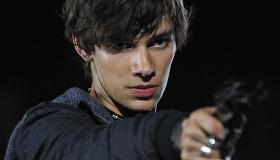 Forty-one years after he created the archetypal zombie movie, Night of the Living Dead, and two years after the box office disappointment of Diary of the Dead, horror master George A. Romero brings the dead back to life yet again in George A. Romero's Survival of the Dead, the tale of zombie-killing soldiers who stumble into the middle of a family feud. Silly and not nearly scary enough, this does not rank as grade-A Romero, but the story unfolds efficiently and economically and it provides plenty of laughs. While not likely to set the box office on fire, it ought to rack up healthy numbers, holding enough appeal to attract genre fans, especially among Romero's sizeable base.

"Nicotine" Crocket (Alan Van Sprang), a minor character in Diary of the Dead, is one of Survival of the Dead 's heroes, the leader of a quartet of AWOL soldiers who roam the land, killing the undead and robbing the living. A teenager (Devon Bostick) they pick up on the road talks them into traveling to Plum Island, Delaware, the kid is lured to the place by a video he found online. The ad's pitchman, Patrick O'Flynn (Kenneth Welsh), is a Plum Island native who was banished from the place by Muldoon (Richard Fitzpatrick) in a dispute over zombies. Sending strangers into the insular community long populated solely by O'Flynns and their rivals, the Muldoons, is the impish O'Flynn's way of getting even. When Crocket's people make the trip O'Flynn tags along, bringing the long-simmering fight between the O'Flynns and the Muldoons to a head and casting into sharp relief differing attitudes toward zombies: While the soldiers and O'Flynns believe the best way to deal with the creatures is to kill them, the Muldoons seek to live with them.

Romero is a master at manipulating suspense, so there are a number of satisfyingly frightening moments in the movie. He also chose wisely in casting Welsh, a veteran Canadian character actor of considerable charisma, who attacks his role with evident glee. The rest of the cast is adequate, but characterization has never been Romero's strong suit and most of the characters are little more than game pieces, apt to become zombie food at any moment. The choice to set the story in a squabble between clans (who speak in the heavy Irish brogue of the Lucky Charms leprechaun) is perhaps too comical. Even at the bloody climax with the viscera smacking across the screen, the laughs trump the fright. It is all very silly and a little thin.