close
The umbrellas of Moscow 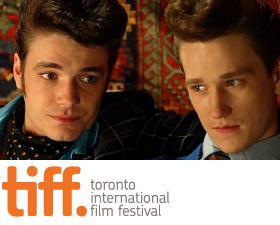 On the face of it, a buoyant musical set in dreary post-Stalinist USSR sounds like an unlikely proposition, but Valery Todorovsky's Hipsters is exactly that. The story of a proper Communist youth whose world is rocked when he encounters Moscow's underground jazz scene, this effervescent confection took four prizes, including Best Film, at the 2009 Nika Awards, the Russian Oscar. Arriving at the Toronto International Film Festival in search of distribution beyond Eastern Europe, subtitles and the obscure subject matter will limit its box office potential in North America. A careful marketing campaign aimed at musical fans that emphasizes the universal appeal of Hipsters ’ joyful romance and high-spirited singing and dancing could neutralize those negatives and garner moderate box office returns.

20 year old Mels (Anton Shagin) is one of the bully boys on the scene of a raid of a "stilyagi," or hipster, hangout, but his curiosity is piqued as he waits for the bust to begin when he spies the young rebels' boisterous swing dancing. Then he chases after pretty, blonde Polly (Oksana Akinshina) when she escapes the authorities' dragnet and is immediately smitten. The lure of the illicit and the power of love overcome his qualms. Named for Marx, Engels, Lenin and Stalin, Mels turns his back on his namesakes, rechristening himself "Mel" in the hipsters' manner of adopting American monikers. Growing his hair out into an enormous pompadour, outfitting himself in riotously hued black-market fashions and taking up the saxophone, he surrenders completely to his new passion, risking his freedom and his future in a society that places the highest value on adherence to authority.

Written by Yuri Korotkov and adapted from his novel Boogie Bones, Hipsters is a deceptively sunny musical, wrapped in candy colors and full of youthful energy. With its emphasis on hot jazz, the music and choreography percolate with exuberance. With its lovers Mel and Polly coming from disparate worlds, the film sometimes plays like a Russian version of West Side Story or John Waters' Cry-Baby. Set in 1955, its tale of defiance is also reminiscent of the classic juvenile delinquent movie of that year, Nicholas Ray's Rebel without a Cause. At the same time, Hipsters does not ignore the political and social ramifications of Mel's actions, limning the consequences faced not just by the stilyagi, but also by their families, friends and neighbors. For the most part, Hipsters is playful Todorovsky even finds humor in Soviet conformity as his camera pauses in a department store to pan across row after row of the same shoe, the only style available.

In a way Hipsters suffers from an overabundance of material. At 125 minutes, it is longer than it needs to be and what begins as a tight story eventually unravels. The characters are strong enough and the actors' performances electric enough to transcend those deficiencies. The movie eventually pays off with a rollicking climax set along Moscow's streets. Hipsters may take place in the middle of the Cold War, but it beats with a warm heart that is hard to resist.