close
Not quite as funny, scary or original as it thinks it is 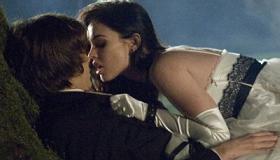 Take Mean Girls or any other teen movie involving girls' jealousy and competition and blend it with the South Park episode in which no one will believe the boys when they insist that Chef's fiancée is a succubus and the result is Jennifer’s Body. That is not to say that Juno screenwriter Diablo Cody's latest is not original—she has so many random ideas floating around in this story of two BFFs whose relationship is ruptured when one of them becomes a man-eating demon that it does have a style of its own. It is not nearly as funny or clever as Cody and Karyn Kusama evidently think it is and it telegraphs its intentions too bluntly to be scary. But given Oscar-winner Cody's cachet left over from Juno, the enduring appeal of horror movies, the popularity of star Megan Fox and the publicity surrounding the make-out scene between Fox and co-star Amanda Seyfried—a scene that had one male journalist at Toronto International Film Festival press screening of the film muttering "All right!" at the screen—distributor 20th Century Fox can expect healthy box office returns at the movie's September 18 release.

"Hell is a teenage girl," announces brainy, nerdy, unlikely, but appropriately nicknamed Needy (Seyfriend) at the film's start. Even before life goes a-kilter in tiny Devil's Kettle, it is abundantly clear that this hell is personified by her beautiful, vapid, best pal, Jennifer (Fox). No one can figure out the girls’ friendship, not even Needy's loyal boyfriend, Chip (Johnny Simmons). A catty classmate suggests that Needy is "totally lesbigay." "Sandbox love never dies," is how Needy explains a lifelong relationship that endures despite high school peer pressure.

That is all before Jennifer's favorite band, Low Shoulder, comes to play the local dive bar Melody Lane, and she goes off with lead singer Nikolai (Adam Brody) and the rest of the group when a fire cuts their gig short. When she returns, Needy sees instantly that she has changed. In the aftermath of the inferno and the murders of several high school boys no one else notices that something is not quite right with Jennifer.

Something is not quite right with Jennifer's Body, either. Celebrated for her ear for dialogue, her knack utterly deserts Cody when she puts words in Jennifer’s mouth. Forced to utter ridiculous lines like "You're lime green Jell-o" or "You give me such a wettie," Fox sounds like Anna Nicole Smith channeling a 7 year old. At least she, Needy and Chip resemble actual human beings, unlike Low Shoulder who come across like Scooby-Doo villains by way of the Manson Family. The violence in the movie is visceral but too cartoonish to take seriously, unlike the Melody Lane fire, which in its obvious inspiration from the Rhode Island nightclub fire of a few years ago reeks with ripped-from-the-headlines, Law and Order tastelessness.

"Is that my Evil Dead t-shirt you're wearing?" Needy asks Jennifer, as Cody directly invokes Sam Raimi's drive-in movie classic. Cody and Kusama are aiming for that kind of silly scary, but they are too self-conscious. The only way Jennifer’s Body is likely to join the Evil Dead trilogy's immortal ranks is if the filmmakers take a tip from Low Shoulder and sacrifice their way to the pantheon.